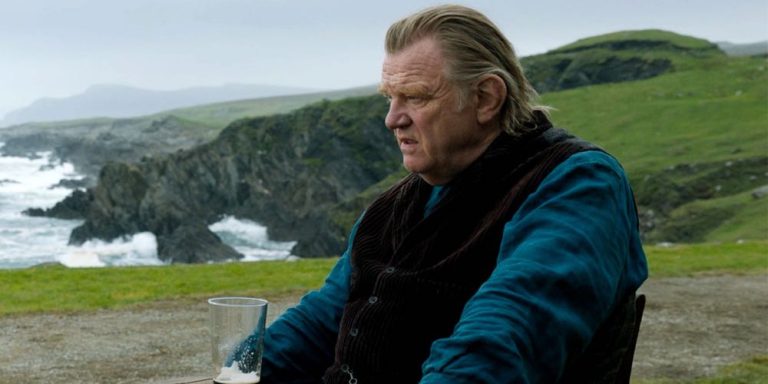 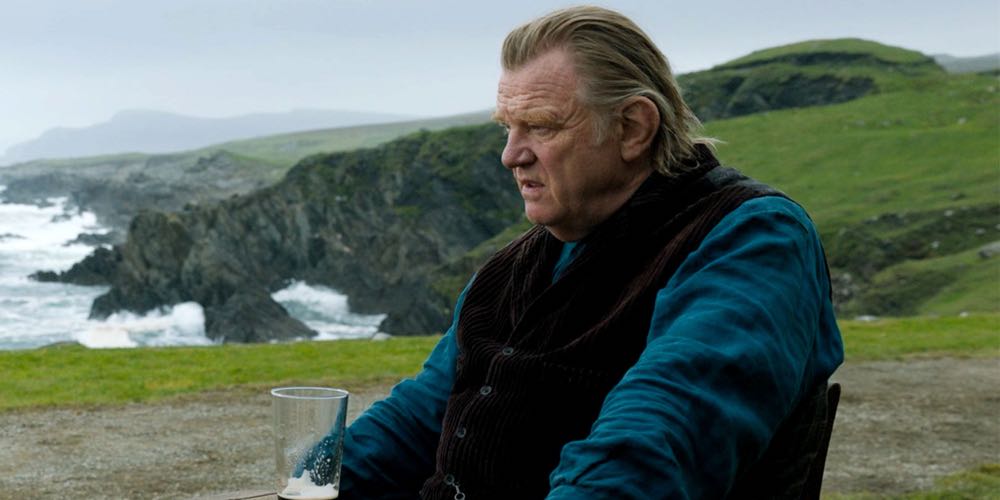 Martin McDonagh’s The Banshees of Inisherin is a film long in the making, having been scrapped, rewritten, and delayed numerous times over the course of McDonagh’s three-decade career. Originally written for the stage, it stands as the final sequence of his Aran Island Trilogy, which examines the loneliness, brutality, and absurdity of rural Irish life. Banshees blurs the line between tragedy and comedy as it follows the inhabitants of Inisherin—a fictional island off the western coast of Ireland—and unravels their nature and desires. The film is also a sequel of sorts to McDonagh’s directorial debut In Bruges, reuniting Colin Farrell and Brendan Gleeson as a similarly incompatible duo with undeniable chemistry. While Bruges follows the developing platonic love between two men, Banshees explores why those fraternal bonds dissolve. However, Banshees offers a contemporary twist to McDonagh’s earlier work, espousing a profound nihilism on masculinity and the good in life.

The plot is simple enough: Padraic (Farrell) is a dairy farmer who enjoys a daily pint with his best mate Colm (Gleeson), a banjo-playing folk musician and composer. He is devastated when Colm abruptly puts an end to their friendship, offering no explanation and refusing even to speak to his former friend. Padraic tries to repair their relationship with the help of his pragmatic sister Siobhan (Kerry Condon) and folksy insight from the local eejit Dominic (Barry Keoghan). When Colm threatens to chop off one of his own fingers each time Padraic attempts to contact him, the two men start down the path of self-destruction.

Banshees opens with angelic folk music as the camera pans down from the heavens onto the Irish landscape. We see Padraic walking with a smile that reflects his sincere and easygoing nature; the rainbow cresting behind him suggests his cheery outlook on life. Conversely, we first see a gruff Colm sitting in silhouette, smoking, apparently deep in thought as he pretends not to hear Padraic’s invite to the pub. He is a “thinker” whereas Padraic is just “one of life’s good guys.”

That is all we need to know about the two men. Rather than provide any background details that would stir bias in the viewer, McDonagh opens at the precise moment of their “break up.” Neither side can be wholly wrong or right in an ill-defined battle between countrymen; “I just don’t like ya no more” Colm eventually informs Padraic. Set in 1923, the story occurs against the backdrop of the Irish Civil War. “Good luck to ya, whatever it is you’re fighting about,” remarks Padraic, peering across the water to cannon fire on the mainland.

It becomes increasingly clear that neutrality is more than a framing device but a thematic premise as well. Colm reveals that Padraic is just too “dull” to waste any more time on. Colm would rather spend his remaining years composing music—an attempt to climb out of the “despair” he faces over securing his legacy after death. Padraic, on the other hand, contends that Colm confuses dullness with “niceness.” He is content to amiably plod through life yet fails to see how lonely his existence truly is. These outlooks increasingly collide as fingers start to come off, but the viewer remains sympathetic to both sides. Must art be sacrificed to find meaning in life as part of a community? Is it better to achieve greatness or be kind to others? Can these choices be reconciled or do we even really have a choice? McDonagh is not so sure.

The film proceeds as Padraic pursues Colm with piteous desperation and Colm suffers from the delusional arrogance that he will leave a legacy “like Mozart.” Padraic’s innocence in the first act engenders his pain in the second, culminating in rage and his final act of retribution. Only with the loss of his innocence does Padraic realize just how lonely he is. The viewer then finds out what loneliness can do to the soul, and no one is better off in the end. Well, almost no one.

Siobhan (Condon) is the only character who escapes the path of self-destruction to find fulfillment. Her character upholds the traditional female virtue of nurturing kindness while surpassing the men in intellect and assertiveness. She alone possesses the good sense to realize that the conflict is meaningless and the men on the island are “all feckin’ boring.” She recognizes the true cause of the rift—Padraic’s loneliness and Colm’s depression—but both men scoff at her when she approaches them with empathy. Others on the island recognize she is the real “thinker” in the family (her only possessions are books), and she is the authority figure they turn to when Padraic becomes irate at the pub one night. Yet Padraic still takes her for granted asking “What about me?” when she tells him she accepted a library job on the mainland. Colm too has little need for the women on the island except when they fawn over his performances. Otherwise, he prefers to dance with his dog.

While Siobhan embodies emotional strength and self-sufficiency, the two men are irrational and emotionally feeble with a selfishness that skirts the line of misogyny. Their climactic acts of aggression, ostensibly a demonstration of strength and will, in actuality represent their descent into weakness and all-too-human vice.

In fact, the very title of the film speaks to this character development. In Irish folklore, a banshee is a female spirit whose shriek portends death. The film is decidedly non-supernatural, so who are these eponymous Banshees? Colm declares that “Banshees don’t shriek anymore, they just sit back and watch.” Thus McDonagh’s banshees—as embodied by Colm and Padraic—merely represent what mankind does to itself. This human darkness guides both men to self-destruct not only in their relationship but in their own souls.

No longer physically able to play the banjo, Colm expresses “relief”; at least now he can avoid grappling with questions of mortality that led to his initial despair. Rather than trying and failing to cement his legacy, self-mutilation becomes the easy choice as he accepts he likely won’t be remembered. Padraic’s fall from grace comes with the death of his beloved donkey Jennie. True to his Irish roots and the tradition of black comedy, McDonagh portrays Padraic’s despair in a shot surely meant to evoke Michelangelo’s Pieta. Like Mary to Christ, Padraic holds Jennie and stares down at her with an expression of tranquil acceptance; the camera pans out to allow the darkness to envelop them both. Yet his acceptance is not one of meaning in death but of the insignificance of moral choices in life. Some people are never going to like you no matter how “nice” you are, so you might as well create Hell for those who bring it on you. Standing up for himself by burning down Colm’s house finally becomes easy once he has forsaken the will required to make moral choices.

Such nihilistic characters are a stark departure from those in McDonagh’s earlier work. In Bruges certainly had a witty cynicism to it but concluded with the two male protagonists finding strength through moral clarity. Here, Ken (Gleeson) comes to feel an obligation to protect Ray (Farrell), brutally sacrificing himself in order to give Ray a shot at redemption. In the final scene, a wounded Ray comes to accept the consequences of his heinous act. He realizes Hell is what we make for ourselves in life and just prays to not die in Bruges. McDonagh’s thematic shift between the two films demonstrates the ark of culture over the past 14 years—a culture that increasingly looks disdainfully at the cultivation of moral resilience, particularly regarding any virtues traditionally considered masculine. While Padraic and Colm are not presented as ideals, they nevertheless show what happens to society when men succumb to their baser instincts.

Whereas Bruges ends with a message of muted optimism, Banshees finds only desolate resignation. Life will not bestow much good: either look out for yourself as Siobhan does or grudgingly submit to the community knowing you cannot change the “bleakness, loneliness, grudges, and spite” that exist in a place like Inisherin. In the latter case, we ought to show a modicum of courtesy that will allow us all to live together without going completely mad. Colm thanks Padraic for not letting his dog burn to death in the final scene. “Anytime,” says Padraic as he casually turns his back and walks away. Colm now accepts he must speak minimally with Padraic while Padraic will refrain from doing the most grievous harm.

Thematic scruples aside, Banshees is in fact quite good. McDonagh perfects the rhythmic banter for which he is known and the four principals all give outstanding performances. The blend of Christian and Gallic imagery complements a script that is distinctly Irish in its ability to still find humor in all the misery. However, the overall cinematic experience cannot overcome the film’s abject cynicism. Colm and Padraic faced a mid-life reckoning and chose to abandon their ideals on the human experience, even if they did not consciously realize they had a choice. Similarly, McDonagh—as a director at the height of his career—chose to abandon the moral promise of his earlier work in favor of a film that internalized the cultural sensibilities of the West’s current malaise. May the rest of us recognize that we all have a choice, and strive for the strength to hold onto meaning through all the despair.

To See Ourselves as Others See Us –