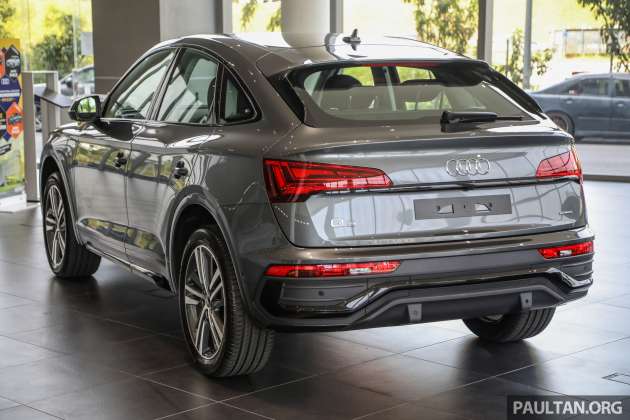 Newly appointed Audi distributor in Malaysia PHS Automotive has released details for the revised line-up in the country, and among them here is the Audi Q5 Sportback S Line 2.0 TFSI quattro, which joins the A5 Sportback, Q2, Q3, and Q5.

As with its sibling of a more traditional SUV bodystyle, the Q5 Sportback for Malaysia is powered by a 2.0 litre turbocharged inline-four cylinder petrol engine that makes 249 PS from 5,000 rpm to 6,000 rpm and 370 Nm of torque from 1,600 rpm to 4,500 rpm. Identical engine output figures, and similarly, transmission is via a seven-speed S tronic dual-clutch automatic gearbox sending drive to all four wheels.

This, too, has previously arrived in Malaysia in August, and which we have also photographed at the beginning of this year. Here, the Q5 Sportback is priced at RM487,223 on-the-road without insurance, with 10% sales tax included, and pricing is effective July 2022.

As the Q5 facelift, the Q5 Sportback may appear to wear a substantial price hike, however this brings equipment that was previously listed as part of a separate Premium Package. On this trim level, the Q5 Sportback gets the S Line exterior that brings LED headlamps with washers function, 20-inch diamond-turned five-spoke alloy wheels shod in 255/45 tyres and a black appearance package brings the darkened look to the vehicle’s brightwork. 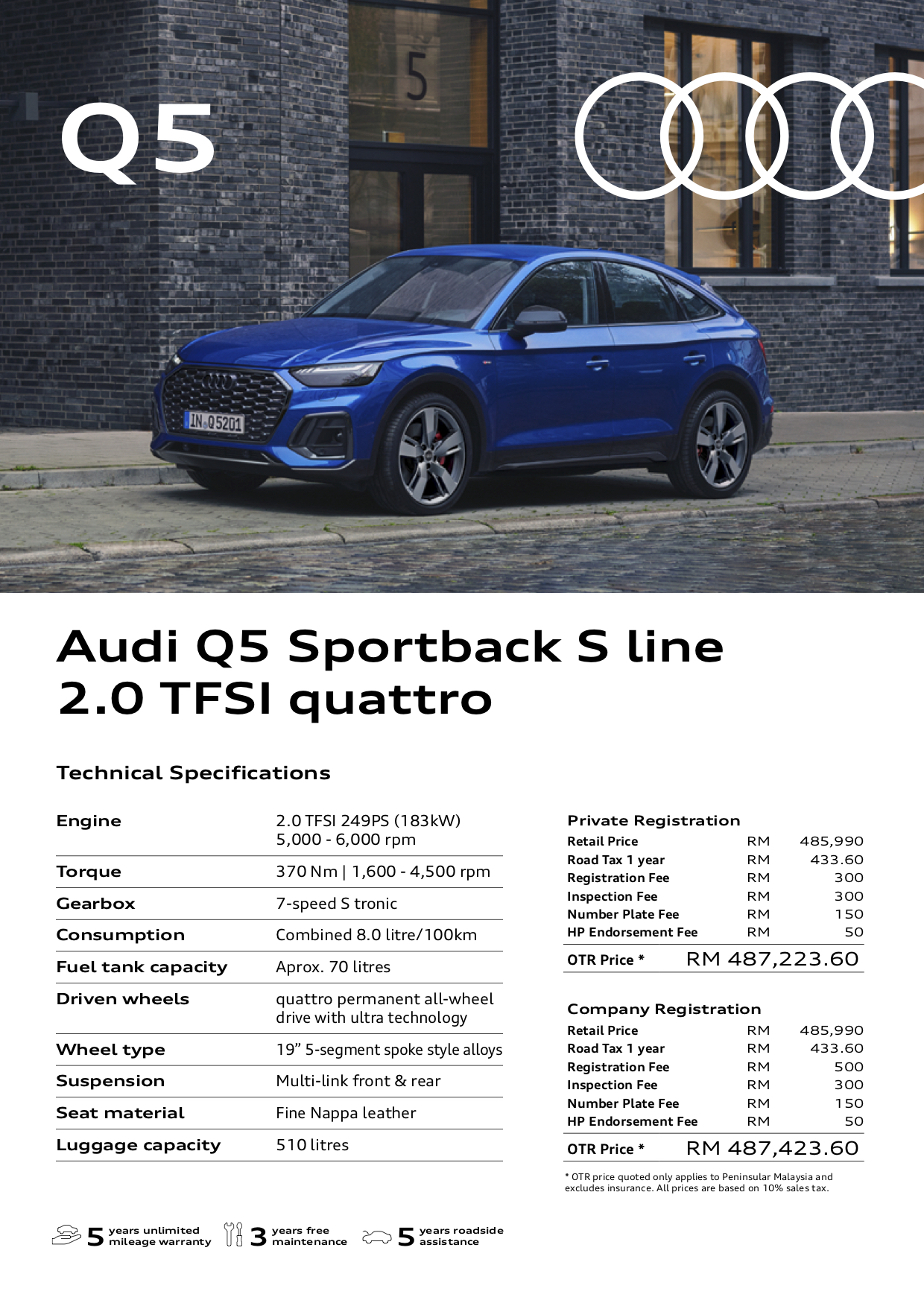 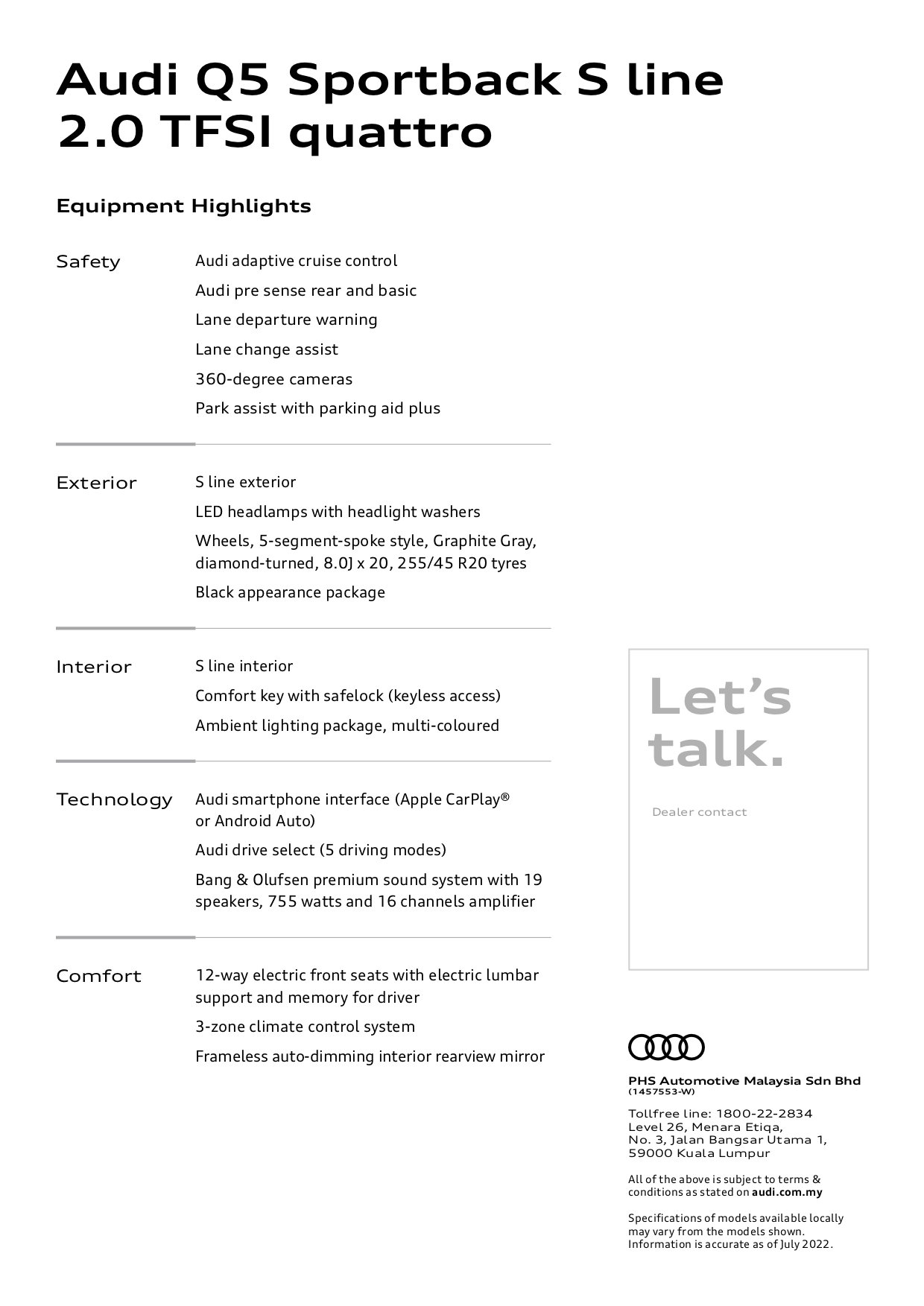 Inside, the cabin gets S Line trim to match its exterior along with fine Nappa leather, and conveniences here include the comfort key with keyless access, while multi-coloured ambient lighting helps set the mood.

For the driver, a total of five drive modes are offered through the Audi drive select function, while connectivity is provided by the Audi smartphone interface that supports Apple CarPlay and Android Auto. For audio, the setup is the 19-speaker Bang & Olufsen premium sound system with 16 channels and output rated at 755 watts.

The Audi Q5 Sportback S Line 2.0 TFSI quattro is covered by a five-year, unlimited mileage warranty with five years of roadside assistance as well as a three-year free maintenance package.