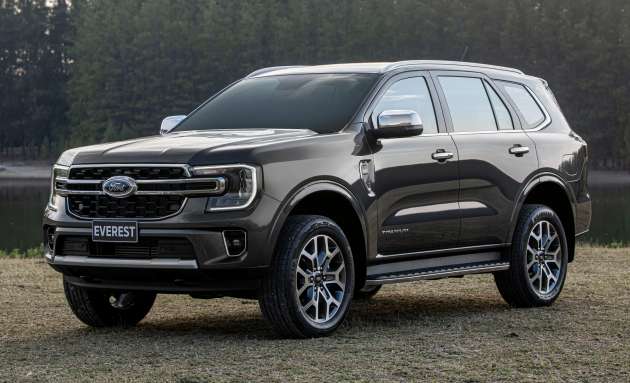 Following the launch of all-new Ford Ranger, Sime Darby Auto ConneXion (SDAC) is now gearing up to introduce the third-generation Everest. First revealed to the world back in March this year, the SUV has already gone on sale in Thailand and will celebrate its Malaysian premiere later this month on September 24.

Built on the same ladder frame chassis as the Ranger, the latest Everest shares a similar face with the pick-up truck. Familiar design cues include C-clamp headlamps, a prominent bar on the front grille as well as a mix of elements meant to evoke a bold a rugged persona.

Elsewhere, the Everest gets its own taillights to accompany its SUV body, which is slightly larger and accommodates up to seven people across three rows. The new model also boasts a longer wheelbase of 2,900 mm (+50 mm) to promote better interior space. On that mention, the dashboard is pretty much identical to the Ranger, with key differences being a greater focus on creating a plush living space and three-row seating. Like the Ranger, there’s no shortage of tech available, with a variety of digital instrument clusters and infotainment touchscreens depending on variant.

Same goes for safety and driver assistance, with available systems being adaptive cruise control, lane keep assist, autonomous emergency braking and many more. The total number of airbags is now at nine, including front driver and passenger, dual seat-side thorax airbags and dual side curtain airbags, which cover all three rows.

A luxurious 7 seater SUV of uncompromising capability, safety and comfort. Witness the premiere of the Next Gen Ford Everest on 24 September. Register now.

As for powertrains, the Everest is offered with three diesel engines that include Single-Turbo and Bi-Turbo 2.0 inline four-cylinders as well as a 3.0 litre twin-turbo EcoBoost V6. There’s also a sole petrol mill in the form of a 2.3 litre EcoBoost four-cylinder, although this will only be offered in select markets from next year. Unlike the Ranger, the Everest only gets automatic transmissions, which are 6R80 six-speed automatic or Ford’s 10R80 10-speed SelectShift automatic.

In Thailand, the Everest only gets the 2.0 litre turbodiesel, with the Single-Turbo version being used for the base Trend and mid-spec Sport variants – both with a 6AT and rear-wheel drive. The Bi-Turbo is for the Titanium+, which is offered with rear- or four-wheel drive, both with a 10AT. Prices range from 1.334 million baht (RM162,506) to 1.854 million baht (RM225,852).