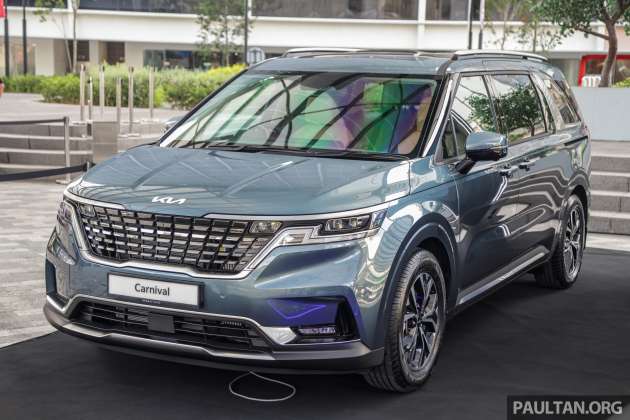 Over the weekend, Bermaz held a public preview for the locally-assembled Kia Carnival, giving us our first look at the CKD model. For the first time since 2020, the Korean MPV is being offered in seven- and eight-seater form, freeing up more space for passengers sitting at the back.

With that comes official prices of the three CKD variants, and they are exactly as leaked. The range starts with the 2.2D 8-Seater at RM231,229 on-the-road without insurance, followed by the 2.2D 8-Seater High at RM247,229 and the 2.2D 7-Seater High you see here, retailing at RM261,229. Again, these prices include the sales and service tax (SST).

As previously reported, these figures are much higher than the 11-seater CBU model, which appears to have been retained to maintain a lower starting price of RM196,341. Having more pews allows the imported variant to be classified as a commercial vehicle, thus granting it lower taxes. 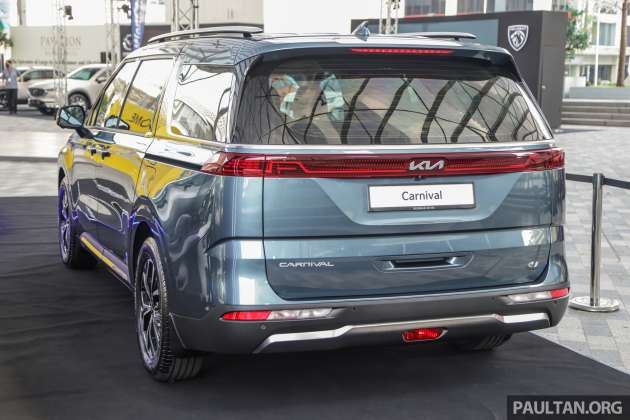 You only have to look at Toyota and Ford to understand the gulf between commercial models like the Hilux and Ranger pick-up trucks (all within the RM92,000 to RM160,000 range) and passenger vehicles such as the Fortuner and Everest SUVs (RM179,000 to a whopping RM269,000).

To make up for the steep hike in price, the seven- and eight-seater models offer a roomier cabin and more versatile seating arrangements. The cheaper eight-seater jettisons one of the rows, swapping the 2-3-3-3 layout for a more conventional 2-3-3 setup. Despite nominally having the same three-abreast seating as the 11-seater, the seats themselves are completely different, with three full-sized pews in the second row – finally providing the middle passenger with a three-point seat belt instead of a lap belt.

As with the 11-seater model, the middle seat can be folded to serve as a table (with integrated cupholders), although it can’t be flipped up to be stowed to the side. Instead, the whole seat is removable – as are the other second-row seats – and can be flipped 180 degrees to face the third row.

All three second-row seats can slide and recline individually, and most importantly, the middle seat can also fit an ISOFIX child safety seat, together the outermost third-row seats. This all means that despite having fewer seats than the 11-seater model, the eight-seater can fit three more child seats (five in total).

The seven-seater loses the extra middle seat, but in return it gains far more luxurious captain’s chairs for the second row. These Premium Relaxation seats not only look cushier than the eight-seater’s but also offer armrests and powered seat back and height adjustment, plus a powered ottoman and a one-touch recline button that allow towkays to stretch out to their heart’s content. The seats can also be pushed inward, enabling them be slid forwards and aft manually.

Thanks to the space freed up by having one less seating row, both the seven- and eight-seater models offer actual luggage space even with all seats up, and with the deep gully there’s a sizeable 627 litre boot back there. That cavernous channel is there to fit the 60:40-split third-row, which stow neatly (via chunky handles on the backs of the seats) into their own storage compartment.

Folding those seats flat frees up 2,785 litres; you can also remove the second-row seats on the eight-seater model to get a massive van-like cargo hold. To free up space for the third-row to do its contorting magic, the space saver spare tyre is positioned under the sliding door on the right side, just like it is on the 11-seater.

Amenities include seven USB Type-A ports (one for data, two for charging in front, two more on the backs of the front seats and another two on the sides of the cabin for the third row), two cupholders for the second row (plus another two on the aforementioned “table” of the eight-seater) and four cupholders for the third row alone (two on each side).

You also get three-zone automatic climate control, with the rearmost controls positioned on the right side of the second-row roof; the airflow comes out of ceiling-mounted “van-like” circular vents (like the Hyundai Staria) for the second and third row. 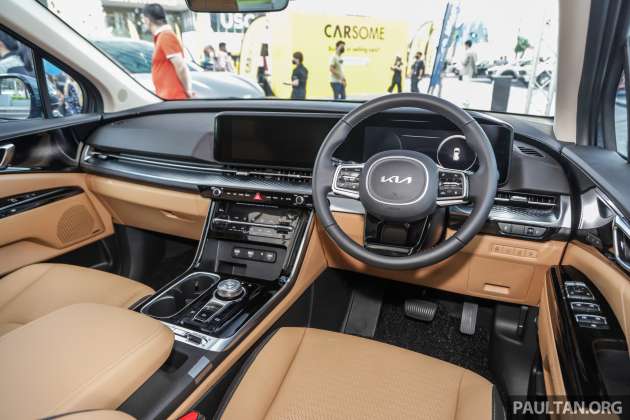 Despite the higher level of equipment, the CKD Carnival looks very similar to the CBU model. They all come with the same automatic LED headlights (neatly integrated into the grille), 18-inch Y-spoke two-tone alloy wheels and silver roof rails. The only visible differences are the full-LED taillights that now span the entire width of the rear end; according to leaked specs they are exclusive to the High variants.

Inside, the CKD models allegedly come as standard with a 12-speaker Bose sound system, as fitted to the 7-Seater High shown here. The latter also gets a 12.3-inch digital instrument display that again is supposedly the reserve of the High versions (the CBU got analogue dials and a 4.2-inch multi-info display), although the 12.3-inch infotainment touchscreen continues to be fitted across the lineup.

Moving up to the High models nets you dual sunroofs, driver’s side seat memory and front seat heating and ventilation, with the seven-seater adding genuine leather upholstery. Safety-wise, all models receive seven airbags, stability control, blind spot monitoring, rear cross traffic alert and a rear seat reminder with an ultrasonic sensor to detect occupants at the back.

As per the CBU Carnival, the CKD models continue to be powered by a 2.2 litre four-cylinder turbodiesel, called the Smartstream D2.2. Outputs are rated at 202 PS at 3,800 rpm and 441 Nm of torque from 1,750 to 2,750 rpm, sent to the front wheels via an eight-speed automatic gearbox with paddle shifters. 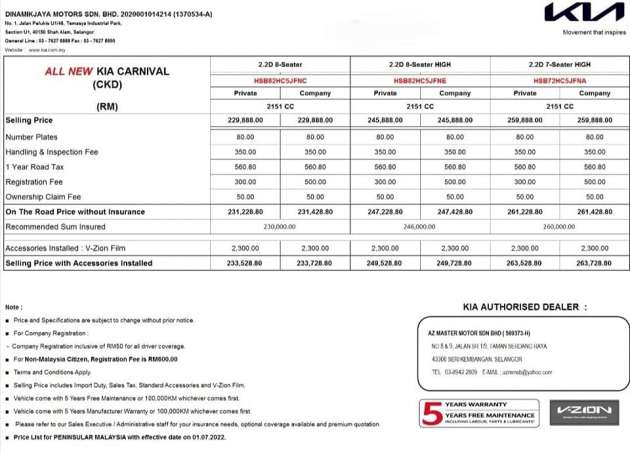 Ethereum (ETH) Could Bottom Up Above $1.5k in a W-Formation