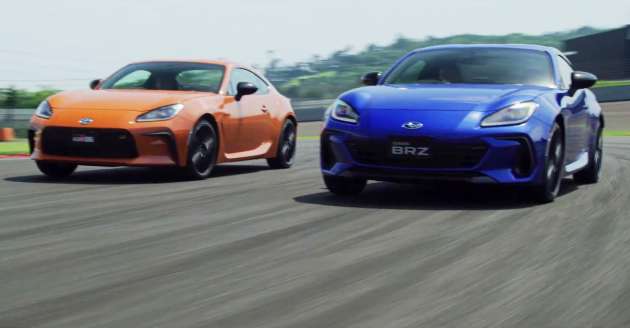 Many moons ago, Toyota and Subaru joined hands to develop a sports car together, with the result being the original Toyobaru twins, namely the 86 and BRZ. Both models were first presented during the 2011 Tokyo Motor Show, with production beginning shortly after in 2012 at Subaru’s Gunma assembly plant.

This year, both companies are celebrating the 10th anniversary of the Toyobaru twins, which have since entered a new generation with the debut of GR86 and second-generation BRZ, with a special variant called the “10th Anniversary Limited.”

The BRZ 10th Anniversary Limited is based on the existing, top-tier S grade and comes with a few special touches to make it special. On the exterior, the 18-inch aluminium wheels receive a matte black finish, the rear “BRZ” emblem and door mirror caps are painted black, and there’s a commemorative sticker placed on the back glass.

Inside, you’ll find “10th Anniversary” embroidered on the door cards along with blue stitching for the seats (with matching accent trim) and gear shift boot. The latter matches the World Rally Blue Pearl exterior finish, which is the hero colour of the original BRZ back then.

As for the GR86 10th Anniversary Limited, it is based on the range-topping RZ grade and gets a Flame Orange exterior as a nod to the original 86, along with similar touches like the rear glass sticker, matching interior stitching and accents as well as embroidered door cards.

The powertrain is unchanged for both cars, so there’s still a 2.4 litre naturally-aspirated flat-four engine producing 235 PS (232 hp) and 250 Nm of torque. Drive goes to the rear wheels via a limited-slip differential and a choice of a six-speed manual or automatic gearbox.