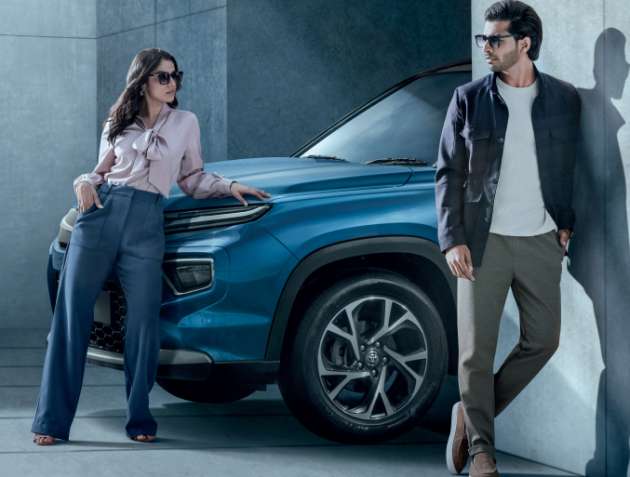 Here’s the first official look at the new Toyota Urban Cruiser Hyryder, which has been teased in India ahead of an expected world debut on July 1.

The Hyryder is a B-segment SUV that sits above the Urban Cruiser, Toyota’s smallest SUV in India, a sub-4m car based on the Maruti Suzuki Vitara Brezza. The UC Hyryder will be longer than four metres and will compete in a rather crowded segment that includes the Hyundai Creta, Kia Seltos, Volkswagen Taigun, Skoda Kushaq, MG Hector and local player Tata Harrier.

The image and video teasers show glimpses of the Hyryder’s exterior, as well as bits of the interior and features. It’s clear that the Hyryder will be available as a hybrid, and the ‘self-charging hybrid electric SUV’ is of the proven conventional variety, and not a plug-in. The front end has the two-tier light layout made popular by Hyundai, with the main beam sitting below slim LED signatures on the top level.

We also a glimpse of the Hyryder’s rear end, which sports chrome “wings” for the Toyota badge and double C-shaped LEDs. The inner ones have a long tail that point to the number plate recess, which is on the tailgate. Those multi-branch two-tone wheels look familiar, like the 17-inch items we had with our 2019 C-HR update.

A second video teaser shows the Hyrider’s air con switched on remotely via a phone app, which pre-cools the car before your entry. The AC itself is a single-zone automatic unit with a digital display. Sharp silver borders of the centre stack can be seen, hinting at a very sculptured dashboard. We also see stitching on the two-tone dash and a floating-style infotainment screen.

Full-hybrid aside, Toyota says that the Hyryder will also be sold in mild-hybrid form, with the system provided by Suzuki, its capital alliance partner and regular collaborator in India.

“By bringing together strengths of both Toyota and Suzuki through the collaboration, the two companies will be able to provide a wide variety of vehicle electrification technologies to customers and contribute to the acceleration of electrification and the realisation of a carbon-neutral society in India,” Toyota said.

Toyota also announced that both companies will start production of a “new SUV model developed by Suzuki” at Toyota Kirloskar Motor (TKM) from August, and that Maruti Suzuki will have its own version of this SUV. The two companies are planning to export the new model, including to Africa.