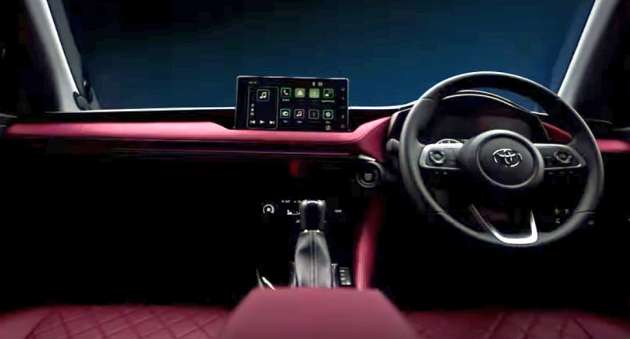 It has been previously indicated that the all-new Toyota Vios was set for an August debut, and now it has been confirmed that this is indeed the case – Toyota Thailand has just released a video teasing the new B-segment sedan, codenamed the D92A, and has revealed when the car will make its world debut; the wraps are set to come off on August 9.

The video clip also offers a glimpse of what to expect – a rakish-looking front, flanked by slim LED headlamps with L-shaped LED DRLs and anchored by what looks to be a prominently-sized lower grille. At the back, sequential turn indicators are highlighted.

Elsewhere, the sole interior shot depicts a striking red-coloured dashboard with a clean horizontal surface, on which the focal piece on the top end is a freestanding infotainment touchscreen central display, which is very Mazda-esque and – more recently – Civic-like in its portrayal. Meanwhile, that three-spoke steering design may look familiar – it’s also seen on the likes of the Toyota Raize and Daihatsu Rocky.

No technical elements have been revealed, but it has been previously reported by Thai motoring site Autolifethailand that two engine options will be available for the car in the Kingdom, these being a 1.2 litre naturally aspirated four-cylinder petrol engine, in line with the country’s eco-car leanings, and a new 1.5 litre hybrid.

Details remain scarce about the latter, but the 1.5L hybrid powertrain could very well be the same one used in the JDM Toyota Aqua a.k.a. Prius c. Seen in that application is an Atkinson-cycle version of the latest 1.5L Dynamic Force three-cylinder engine, which makes 91 PS/120 Nm, which is combined with an 80 PS/141 Nm electric motor to deliver a total output of 116 PS. There’s also an E-Four version, which adds on a 5.3 PS/52 Nm rear motor to make it AWD.

As for the 1.2 litre NA, it will be very much a Thailand-only offering, with a 1.5 litre unit being the expected powertrain for markets elsewhere, including Malaysia. It has been said that the new Vios will sit on a Daihatsu New Global Architecture (DNGA) platform, which underpins models like the Perodua Ativa/Daihatsu Rocky/Toyota Raize as well as the Toyota Avanza/Toyota Veloz/Daihatsu Xenia. More on the all-new Vios when the time comes.