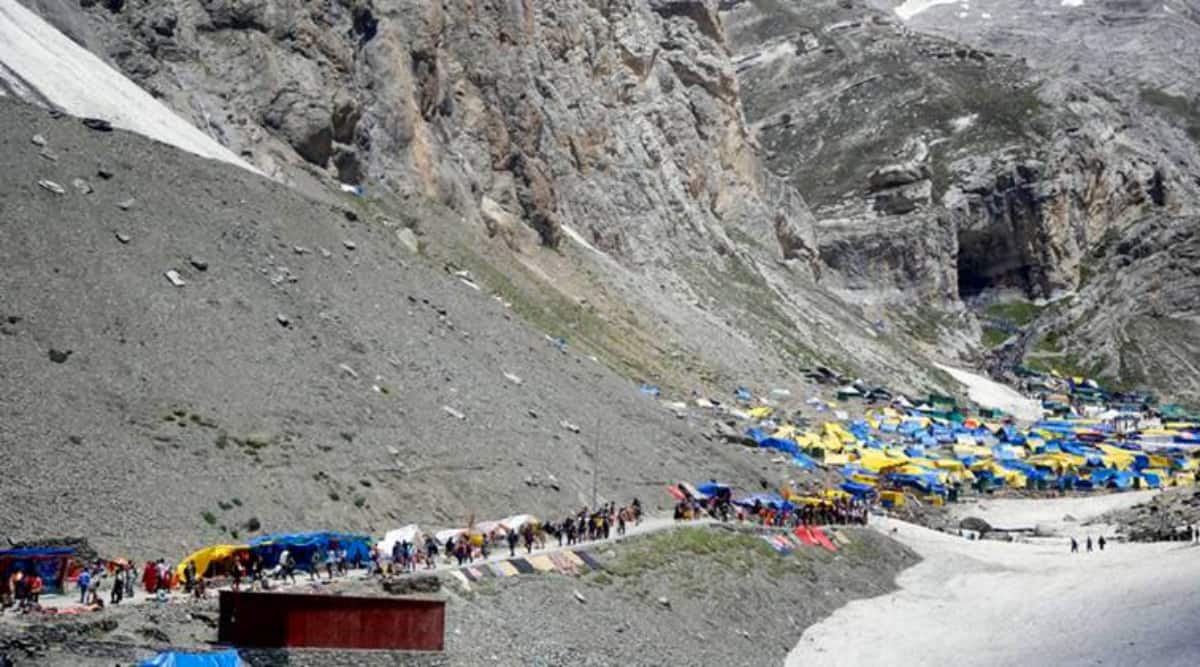 Amarnath pilgrimage resumed on Monday after remaining suspended for three days following flash floods that claimed 15 lives, while the Jammu and Kashmir administration said it would get a clear picture by Tuesday about the damage.

In the wake of allegations that the pilgrim camp was set up at a “risky” site, a spokesperson for Raj Bhavan told PTI that flash floods that occurred in the past were taken into account during the planning and Friday’s gush of water “was beyond calculations and never witnessed before”.

The cave shrine is located at an altitude of 3,880 metre in south Kashmir. Jammu and Kashmir Lieutenant Governor Manoj Sinha is the chairman of Shri Amarnathji Shrine Board (SASB) which manages the annual yatra.

The spokesperson clarified that the tents were never placed at the river bed and were, in fact, moved far beyond an embankment created this year for the safety of people.

“While planning for the tent this year, SASB had taken into consideration the flash flood occurring in 2021 and 2015.

”The process of constructing protection bunds by way of crate protection was started in October 2021, following discussion with experts and considering the last year’s experience of flash floods in August,” the official said.

“Last year’s flash flood, as well as the one in 2015, was discussed and taken into account and on the basis of expected water levels, it was decided to take precautionary measures such as building the embankment.

“‘But the water that suddenly gushed into the stream last Friday was beyond all calculations and never witnessed before,” the spokesperson said.

The clarification came in the wake of allegations that the SASB had ignored last year’s cloudburst incident on July 28 near the holy cave while setting up langars and tents in the dry bed of the stream outside the shrine this year.

Although there was no Amarnath yatra last year due to the COVID-19 pandemic, the incident was serious enough to prompt Lieutenant Governor Manoj Sinha to inform Union Home Minister Amit Shah over telephone.

“Spoke to Hon’ble Home Minister Shri Amit Shah Ji and discussed the incident of cloudburst at higher reaches of Shri Amarnathji Shrine. There were gusts of water near the Holy Cave area and the nallah adjoining the Holy Cave,” Sinha had tweeted on July 28 last year.

Jammu and Kashmir’s former chief minister Farooq Abdullah had last week questioned the rationale behind setting up tents in the dry bed of the stream and demanded an inquiry to fix responsibility.

“The location of the tents and langars is such that I do not think these things were done there earlier. Panjtarni is such a nice area for this. This needs to be investigated. Maybe it is a human error,” Abdullah said.

The local administration had claimed that flash floods had occurred because of cloudburst, a claim negated by the Indian Meteorological Department (IMD) which termed it as a highly localised rain event only.

“The flash floods could have been triggered due to rainfall in the higher reaches of the mountains near the Amarnath cave shrine,” IMD Director General Mrutyunjay Mohapatra had said earlier.

The Raj Bhavan spokesperson also dismissed the allegations that Radio Frequency Identity (RFID) cards had not been properly distributed. Some of the pilgrims had said on their return that they were never provided the RFID card.

“All yatris are provided with an RFID tag. This is for the first time RFID tag is being issued for Amarnath Yatra to ensure pilgrims’ security and safety. RFID tag had proved very useful on the day of the flash flood in ascertaining how many people had crossed into the area closest to the cave,” the spokesperson said.

However, he chose not to answer about the number of people who were still missing.

Officials, in the know of the developments, said the picture will be clear by Tuesday evening when the remaining debris would be cleared.

A day after the Andhra Pradesh government had said that 37 pilgrims were still missing, its Additional Resident Commissioner of AP Bhavan Himanshu Kaushik, who has been camping in Srinagar, said that 35 persons for whom “we received calls from their relatives on Andhra Pradesh helpline numbers” have been traced and are safely returning to their state.

Out of the remaining two, the body of Gunisetty Sudha of Rajamahendravaram was found on Monday and was identified by her husband.

Another woman Kotha Parvati of Rajamahendravaram still remained untraced and the search for her was continuing, he added.

Flash floods near the shrine on July 8 left at least 15 people dead and more than 30 missing.

According to the officials, among the dead are six pilgrims from Rajasthan.

Two pilgrims hailing from Uttar Pradesh were cremated at Srinagar while some of the bodies of the victims who had been identified were airlifted to their native places.

Air Commodore Pankaj Mittalon on Monday said that the efforts of the first responders ensured that the number of deaths was “limited”.

He said a major part of the rescue and relief operations was over and the area should be good enough to be opened for normal activities in the next two days.

“Basically, due to the initial efforts which people put in on the first day, the fatality rate and the number of casualties were really limited,” he told reporters here.

“Major effort (of rescue and relief operation) has already gone through and they have already cleared the opening of the yatra again. I think in a day or two, we will be able to clear the area for anything else,” he added.

The Indian Air Force (IAF) officer said the weather was the biggest challenge in the rescue and relief operations in the aftermath of the incident.

“The valley (leading to the cave shrine) being narrow and due to clouding, choppers were finding it difficult to enter,” he told reporters.