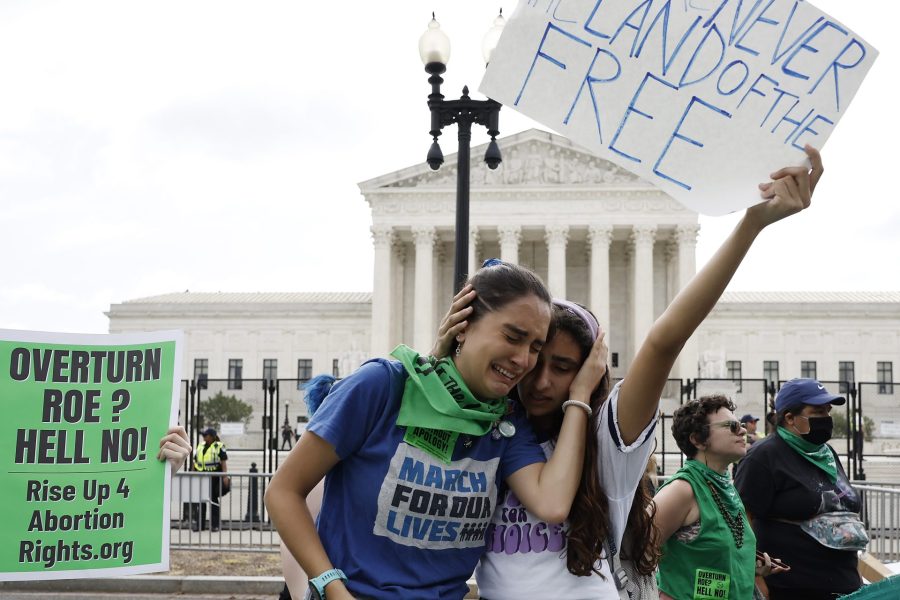 SAN DIEGO – In the wake of Friday’s landmark Supreme Court ruling to strike down Roe v. Wade, California and local lawmakers largely condemned the decision and called on their colleagues to protect access to abortions in the U.S.

The 6-3 ruling in Dobbs v. Jackson Women’s Health Organization, ushered in by the court’s conservative majority, upholds a Mississippi law banning abortions after 15 weeks. It is likely to usher in a wave of new state laws banning abortion with 13 states already having “trigger bans” that take effect automatically or with minimal effort from legislators.

That likely is not the case in California, which is expected to continue with its current laws on abortion access.

When the court’s draft ruling leaked to Politico in May, Gov. Gavin Newsom even proposed a $125 million reproductive health package to prepare the state for a wave of out-of-state residents seeking to terminate unwanted pregnancies.

The response to the blockbuster ruling overturning a nearly 50-year-old court precedent was swift with Rep. Sara Jacobs, D-San Diego, saying it “will go down as one of the most destructive, regressive, and shameful decisions made by the Supreme Court in our nation’s history.”

“As one of the few women of reproductive age in Congress, this horrific attempt by Republican-appointed justices to strip people of their bodily autonomy is personal,” Jacobs wrote in an emailed statement. “It is an attack on the most basic of human rights and we can not let it stand. My Democratic colleagues and I will use the full force of our office to stand up to this coordinated campaign by the Republican Party to deny Americans access to basic health care and stifle their right to privacy.”

Jacobs added, “We will take immediate action to protect the right to safe and legal abortions across the country. We know what a world without Roe looks like and we refuse to go back.”


With Roe overturned, which states are ready to ban abortion?

“The Court’s conservative majority has turned back the clock on our nation’s progress, impacting millions of women and restricting their access to reproductive health care,” Vargas said in a statement. “Roe v. Wade was the law of the land, and overturning precedent could now jeopardize other hard-fought legal victories, including LGBTQIA+ rights, racial equality, and more.”

Vargas said he was “proud” that California has legislation to allow residents to make their own health care decisions, but that “millions of women across the country now face a different reality.”

“This is a disappointing day, but the fight is not yet over,” he said. “I’ll continue working to ensure that our nation always moves forward, not backward.”

In a statement, U.S. Sen. Alex Padilla, D-California, wrote that six justices “cast aside half a century of precedent” to overturn Roe. He further blamed the decision as “the direct result of a Republican effort to radicalize our Supreme Court.”

“Now, in decision after decision, a radical right-wing majority of Republican-appointed justices is rewriting history and overturning settled precedents in order to undo hard-won progress,” Padilla said. “In doing so, they have provoked a crisis of legitimacy at the Supreme Court.”

At the state level, Senate President pro-Tempore Toni Atkins, D-San Diego, wrote that she shares “the searing fury” felt by Americans on the court’s decision.

“During my time running a women’s health clinic, I saw firsthand what lack of access meant,” Atkins said. “I listened to and learned from a distraught mother whose daughter died after an illegal abortion, and helped women understand all of their options when they thought they had none. We will not be shoved back into the dark days of desperate decisions. Abortion is health care and the decision to have one lies solely with the patient.

“California will not leave people vulnerable to the tyranny of a loud minority.”

In San Diego, both Mayor Todd Gloria and San Diego County Board of Supervisors Chair Nathan Fletcher released statements on the ruling. Fletcher, a Democrat, called it a “dark day in our country.”

“Today’s ruling is one that none of us hoped to see, but one we all feared could occur,” he said. “We must use this tremendous setback as motivation. It’s time to fight forward, to fight for what is right, and work together to fight injustices against women and all people.”

“This is why we fight,” Lawson-Remer said. “We can never take our rights for granted. Time for a constitutional amendment in the state of California. Now. Time for us to lend a helping hand to the hundreds of thousands of women trapped in states where our bodies are not protected, where our health and autonomy are subjugated.”

A spokesman for Supervisor Jim Desmond, a Republican, said he’s out of town for his anniversary and did not issue a statement on the court’s decision.