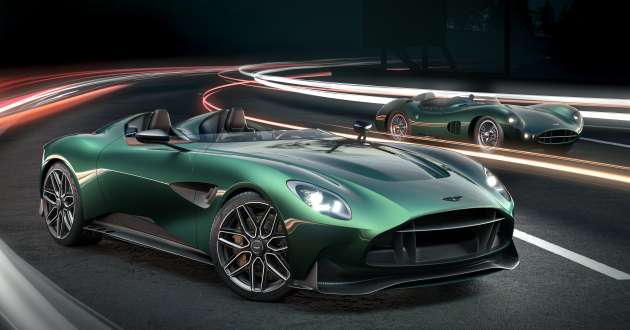 The car also pays homage to the company’s two-seater, open-cockpit sportscars in the past such as the DBR1, which won the 1959 Le Mans race and the World Sports Car Championship in the same year, and DB3S.

The DBR22 sports an entirely new front grille with a unique carbon fibre design, replacing the usual veins seen on production Aston Martin sportscars. This design is directly inspired by the DBR1 and DB3S.

The front bonnet features a dramatic horseshoe vent to channel air to the V12 engine resting underneath. Towards the side, you get carbon fibre side mirrors and 21-inch alloy wheels with centre-lock hubs made especially for the DBR22. At the rear, under the slim, full-width light bar is a perforated panel to allow hot air to exit. Even the exterior colour is bespoke, developed using the Paint to Sample option through Q by Aston Martin.

The cockpit, meanwhile, is a mix of leather and exposed carbon-fibre, defined by an all-new dashboard and infotainment displays. Behind the carbon fibre seats are twin nacelles that smoothen airflow behind the occupant’s heads.

Also unique to the DBR22 is an aluminium 3D-printed rear subframe, the first time Aston Martin has done so for any of their cars for additional weight-saving. While the car is badged as a concept, the company does say that it is slated to become a production reality for select Q by Aston Martin customers, although exactly just how many will be built isn’t known.