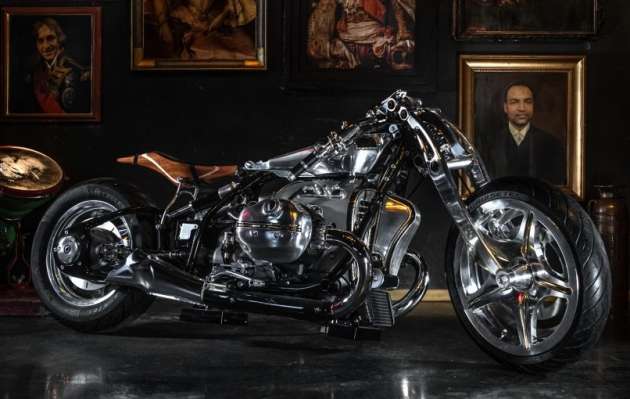 Hand-made in the old school manner is the BNMW Motorrad R18 Magnifica, shown at the Top Marques show in Monaco recently. This custom R18 from BMW Motorrad’s Heritage line of motorcycles is commissioned by Officine Riunite Milanesi and built by Andrea Radaelli of Radikal Chopper.

The R18’s original telescopic front forks are gone, replaced by girder forks with a high chrome finish and reminiscent of the motorcycles of the pre-war era of the 20’s and 30’s. The tail section and massive rear mudguard from the R18 are also removed, leaving the tail and seat of the Magnifico made from one-piece and looking like the assembly is floating without support.

The brake disc and calliper are also hand made, mated to billet alloy wheels machined to Radikal’s design. Mahogany wood is used in the tail piece, with a black leather seat pad, putting one in mind of BMW cars of the 1940s with wooden steering wheels.