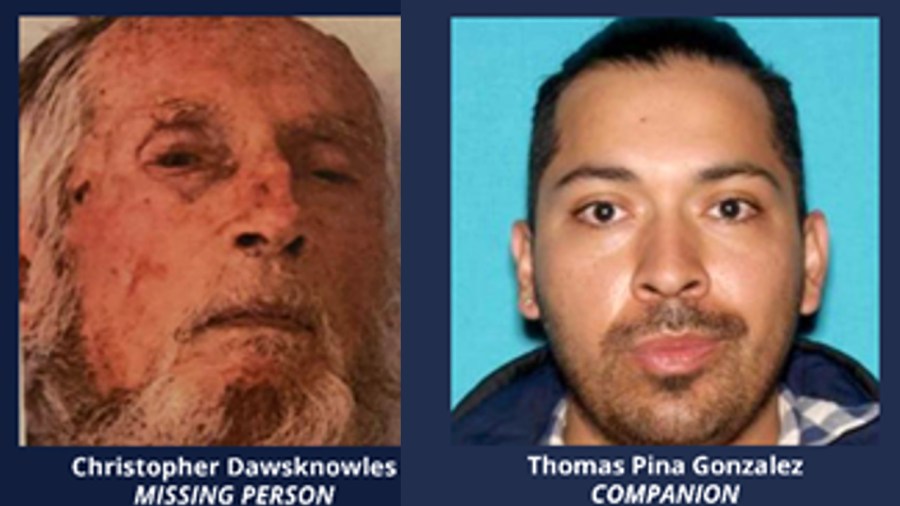 CHULA VISTA, Calif. — A missing man deemed “at risk” by police was last seen getting wheeled away from a Chula Vista assisted living facility by another man, officials said.

Christopher Dawsknowles, a 79-year-old with dementia and medication requirements, has been missing since Saturday, July 2, according to a Chula Vista Police Department news release. He was last seen that day getting wheeled away by a man described only as “an acquaintance”: 32-year-old Thomas Pina Gonzalez.

Police shared photos of both men in a missing person’s bulletin Wednesday.

Authorities said they were spotted leaving a senior assisted living facility on Third Avenue near D Street. At the time, Dawsknowles was sitting in a wheelchair and wearing a green hospital gown. Officials say the wheelchair was left behind when the two disappeared.

Dawsknowles is considered at risk due to his medical conditions and that he cannot move around on his own, with or without a wheelchair, police said.

Police described him as a white man with green eyes and gray, shoulder-length hair. He is five feet, 11 inches tall and weighs around 152 pounds, according to police.

Officials urged anyone with information about where Dawsknowles might be staying, or who has contact information for Gonzalez, to call Chula Vista Police Department at 619-691-5151.

Those wishing to remain anonymous can also contact San Diego County Crime Stoppers at 888-580-8477, or submit a tip via P3tips online.