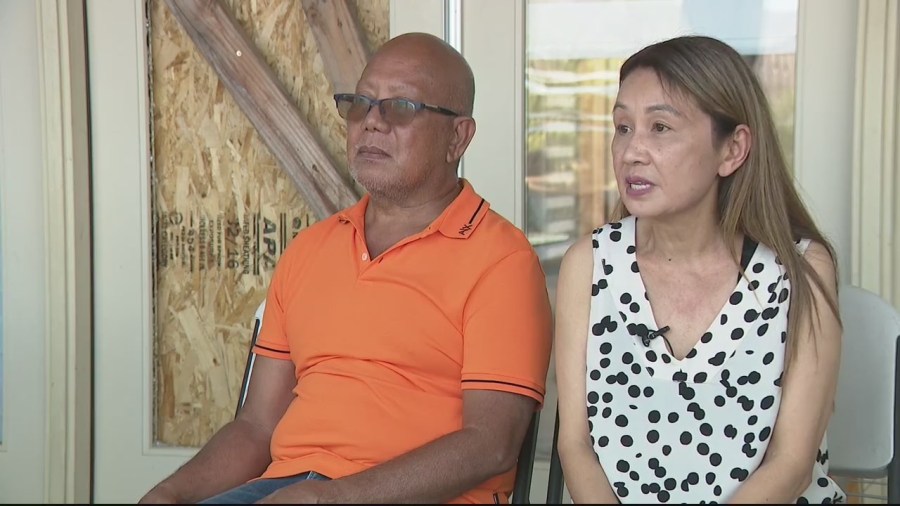 CHULA VISTA, Calif. — Chula Vista police are investigating two related home burglaries that happened less than a mile away from each other in the Rolling Hills Ranch Community.

Both burglaries involved suspects in a Red Lexus between 10 a.m. and 12 p.m. Friday.

One of the burglaries happened at Angie Valerio and Tony Salamad’s home, while they were out running errands Friday morning. When they got back home, they couldn’t find one of their dogs and immediately noticed the broken glass from the door that leads to their backyard.

“That’s when I saw the scattered glass from the door and I start screaming,” Angie Valerio said. “Oh my gosh, someone broke into our house, call 911, call 911.”

Nearly every move was caught on security footage. Valerio shared the footage which shows two people dressed in black getting out of a red Lexus, making their way through a side gate and then shattering a glass door to make their way in. The barking dogs did not deter the criminals.

Valerio said the two suspects who went inside pepper-sprayed the homeowners’ dogs. They took their dogs to the vet and they are expected to be okay.

The thieves made off with a lot of cash and expensive jewelry after rummaging through their bedroom and office.

“It’s very heartbreaking,” Valerio said. “The jewelry they got from me, it’s the heirloom that I received from my parents. It’s the only memory I have from my parents, they took it away. I have nothing left.”

Valerio said after watching the security footage, it looks like the two suspects knew exactly what they were doing.

“It looks like an inside job, I don’t know.” Valerio said.

The incident has Valerio scared, making her want to move.

“I’m just so scared, I don’t feel comfortable in this place no more. This is a gated community home. I thought we were safe, I am just so scared right now. In my own backyard, I am so scared to go for a walk, or walk my two dogs,” Valerio said.


SDG&E customers to receive bill credit in August, September; here’s how much to expect

Sgt. Anthony Molina of the Chula Vista Police Department recommends people add as many deterrence as possible to their homes to try and prevent this from happening, but recognized that his family also had security cameras and had locked their doors.

“More lighting, motion sense lighting, adding cameras,” Sgt. Molina said. “Some of us haven’t thought of those things and a lot of us wait until after the fact, including myself, its happened to me.”

Molina also advises getting to know your neighbors.

Detectives are following up on the leads related to this vehicle seen in the video, according to police.

CVPD is asking anyone with information about the crime to contact them at 619-691-5151.

Police are also asking people who live nearby to check their cameras for a red Lexus RX between 10 a.m. and noon on July 15.