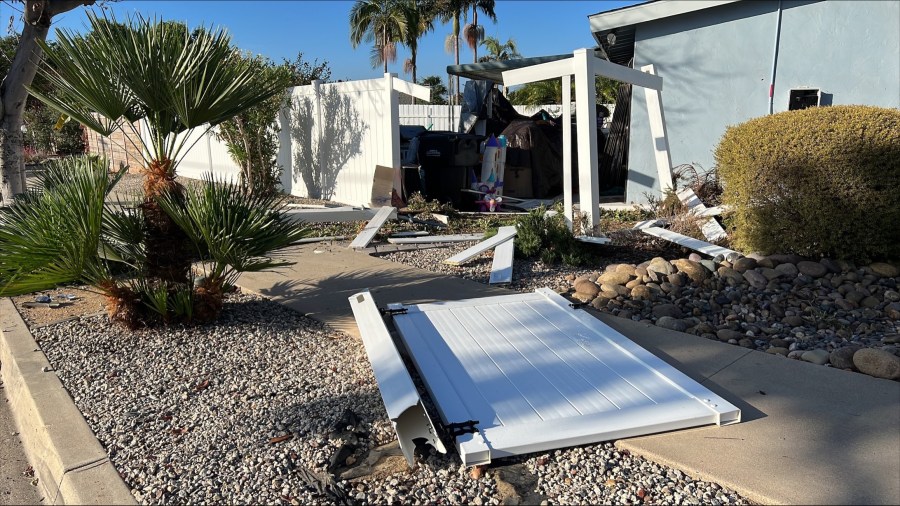 SAN DIEGO — Four men were taken into custody while trying to flee from police after the driver of a truck crashed into multiple vehicles and a house early Thursday morning, according to San Diego Police Department.

Police received a call around 4:45 a.m. that two vehicles were speeding down the street in the 2400 block of Blue Jay Drive in San Diego’s Birdland neighborhood, a couple blocks away from Rady Children’s Hospital. Witnesses reported that the two vehicles may have been racing, police said.

The driver of the truck crashed into a parked vehicle, kept driving and then rammed through a fence and hit the side of a house at 2491 Blue Jay Drive, an SDPD Watch Commander confirmed to FOX 5. The house suffered some damage and the fence was completely destroyed.

The driver still did not stop, fleeing the crashes and getting onto northbound State Route 163, before crashing into another vehicle at the Clairemont Mesa Boulevard exit.

The four men in the truck proceeded to exit the vehicle and attempt to flee the scene, but all four were detained by SDPD and California Highway Patrol officers, according to authorities.

The driver of the truck was being evaluated for a DUI, SDPD said. It is unknown at this time if any arrests have been made.

There were no reported injuries related to the string of crashes. The full extent of the damages has not yet been determined.

A witness near the scene of the final crash told OnScene TV that he was chasing the truck himself after his vehicle was hit in the Point Loma area by the truck driver, witnessing the multiple other crashes while trying to keep the driver from getting away.