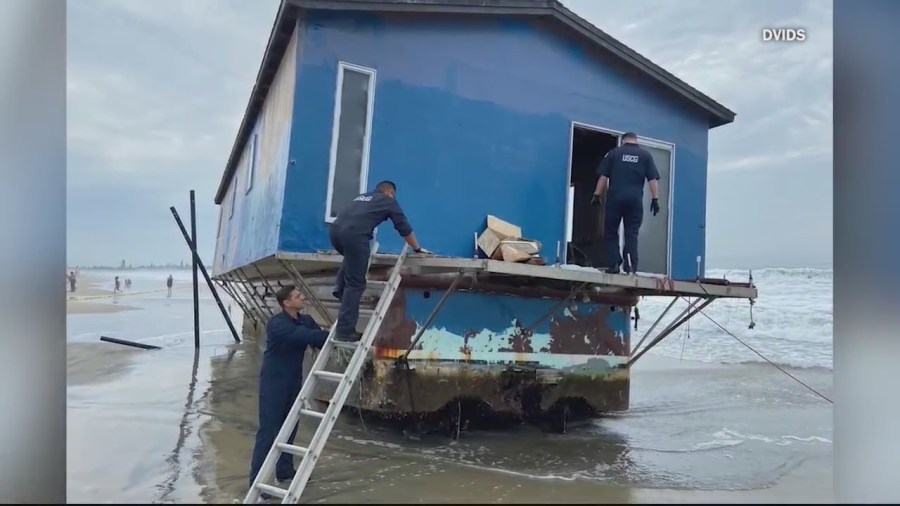 CORONADO, Calif. — Multiple boats crashed onto North Island as the brunt of Tropical Storm Kay whipped the coast this past weekend.

During the peak of Tropical Storm Kay, the Coast Guard said three boats crashed onto North Island. Coast Guardsmen spent the weekend cleaning up after three vessels that washed up on North Island, including a house barge.

“We removed dozens of fuel cans as well as multiple Marine-grade batteries, chemicals such as bleach, dish soap, other things that can enter the water domain,” said Lt. Chris Dunton of the U.S. Coast Guard.

That’s right, a house on the water that crashed ashore, adding to the vessels already abandoned in Coronado from previous storms.

“These irresponsible boaters with a wanton disregard for the law and policy, and they do leave these vessels on shore, and unfortunately, right now, if you were to go out to sea, Naval Air Station North Island and the beaches of Coronado, you’ll see ten very large vessels that are just sitting there,” Dunton said.

The Zuniga Jetty is the last free public anchorage near San Diego and Coast Guardsmen say when boat owners fail to properly secure their boats there, it leaves them vulnerable to washing ashore.

One boat owner in the area says boaters should leave Zuniga Jetty to get to safety during storms.

“The real thing is you can’t be in an open, exposed anchorage when all you have is a leashore behind yo, so the answer is don’t be there during those times,” boat owner Stephen Mann said.

The Coast Guard warns these boat owners are subject to thousands of dollars worth of fines, but many boat owners never try to recover their vessels.

“If the last thing that they own in the world just washed up on the beach, they don’t have two nickels to pay for its cleanup,” Mann said.

The Coast Guard says these boat owners could face civil penalties and possible imprisonment up to five years.