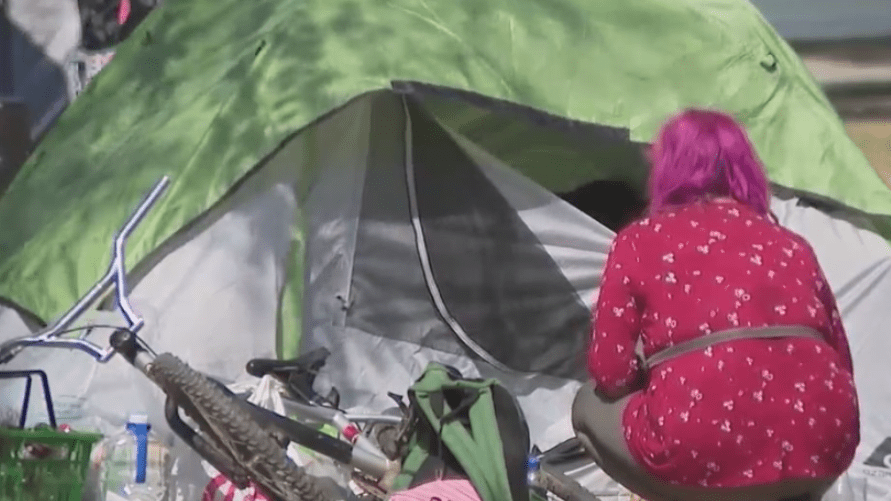 CHULA VISTA, Calif – Homeless advocates have filed a lawsuit on behalf of a group of homeless people against the City of Chula Vista, seeking a temporary restraining order from being evicted from Harborside Park, a public space in the South Bay city.

“It is the second largest city in San Diego County and there is no shelter for homeless people,” said one advocate.

“The problem is not the unsheltered folks in the park, the problem is the folks right here at Chula Vista City Hall that I’ve done so little to help people experiencing homelessness,” said Michael McConnell, a longtime advocate for the homeless.

Harborside park is adjacent to the San Diego County Health and Human Services Agency’s South Region building. The Chula Vista park currently has dozens of tents line, mountains of trash, and -according to the city- is a haven for crime, destruction, and drugs.

In an effort to take back the park, Wednesday the city will move in to remove the unsheltered population.

McCann says there will be representatives from reputable organizations to assist in providing temporary shelter and that if no beds are available, the city will provide hotel vouchers. However, homeless advocates say the city has done nothing for this population and no such beds exist.

“These folks have been told that there will be resources for them tomorrow at a direct connect. Tomorrow, the day of eviction. We have called every single resource the city has cited, McAllister which is a detox center for folks with substance abuse has zero beds and it has a waiting list, even if they do have beds open the city cannot jump the list and get those,” said a woman representing the group of advocates.

According to McCann, the city has reserved beds for the entire Harborside park population and broke ground two months ago on a long-term shelter.

“As Mayor, this was a tough decision but necessary to address the public health, safety, and crime
issues in the park – especially at a park next to an elementary school,” said Chula Vista Mayor Mary
Casillas Salas. “I have accompanied the HOT team as they reach out to our unsheltered population,
and I can report that they work tirelessly to help individuals and families access services to address
housing, health care, mental health, substance abuse, domestic violence, and other issues. Housing
and homelessness are some of the biggest challenges facing jurisdictions today. There is no easy
answer – but we are putting in the hard work to address these challenges in Chula Vista.”

So far a judge has not granted the injunction.