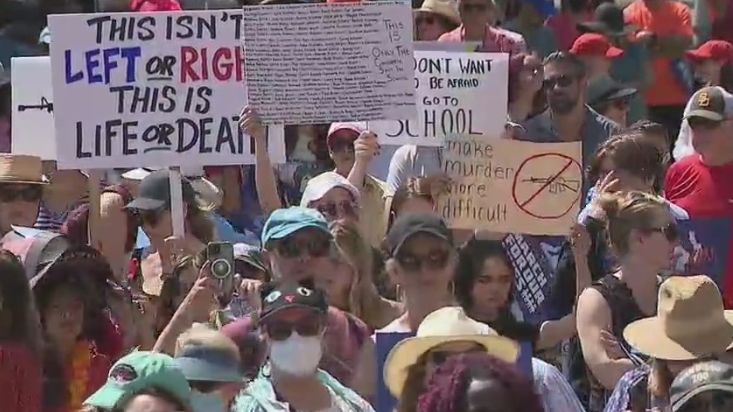 SAN DIEGO – San Diegans on Saturday took part in a nationwide movement to bring an end to gun violence.

Hundreds rallied and marched in front of the San Diego County Administration Building Saturday morning during the event put on by San Diegans for Gun Violence Prevention.

The march outside of the administration building was just one of multiple events hosted in the area.

North County supporters gathered for a “March on Moonlight” in Encinitas, while others gathered for the March to End Gun Violence on Pacific Highway downtown. There was also a community gathering in City Heights.


Thousands attend March for Our Lives rallies across US, demand action on gun laws

“I’m with you on banning assault weapons, ghost guns and large-capacity magazines,” said Rep. Scott Peters, one of the speakers for the rally.

The rally also featured a survivor of the 2011 Tucson shooting where U.S. Representative Gabby Giffords was injured.

The events are part of a nationwide movement with the student-led organization March for Our Lives.

“In Washington D.C., March for Our Lives is having a humongous rally and they organized marches all over the country on the same day to demand that our government ask pass finally sense able gun regulation so that we can keep our people safe,” said Ron Marcus with San Diegans for Gun Violence Prevention.

Marcus says San Diegans have had enough after multiple mass shootings across the country over the last few weeks.

Marcus says it’s now up to the government to take action and they will not stop demanding it.

“The federal government has the tools and has the ability to vote for sensible gun legislation and put a stop to this full stop and they haven’t done it yet – and so we are totally tired of waiting and we are taking action,” said Marcus.