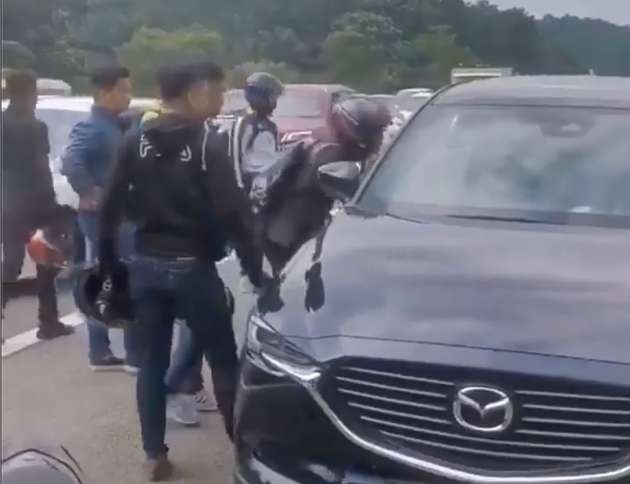 Another day, another incident involving the use of the emergency lane in Malaysia. A video of a group of motorcyclists berating the driver of a Mazda SUV parked on the emergency lane on the PLUS highway went viral on social media over the weekend.

It was reported that the driver stopped on the PLUS highway north-bound emergency lane because his pregnant wife was suffering from nausea and wanted to vomit. After stopping, he wanted to resume his travel, but had to emergency brake because a Toyota Alphard entered the emergency lane.

When that happened, two motorcycles could not avoid the Mazda in time and hit it. As a result, three motorcyclists sustained minor injuries. This is when the drama in the video below started.

When it comes to the rule books, everyone in this incident is wrong. Under Rule 53(1) of Road Traffic Rules 1959, you are not supposed to:

Offenders can be fined up to RM2,000 or be jailed up to six months, or both.

The law states unequivocally that no vehicles are allowed to use the emergency lane unless authorised. But, with traffic conditions the way they are on Malaysian highways, in general the police and JPJ do not enforce this law on motorcyclists in the interests of keeping traffic moving and the safety of all road users.

However, motorcyclists should still travel at a reasonable speed on the emergency lane so that accidents can be avoided if necessary. I mean, if you want to use the emergency lane as a lane, the two-second rule logically applies to all lanes.

We don’t have any details on what the Toyota Alphard was doing to cause the Mazda SUV to suddenly have to brake. But it is nowhere to be seen in the viral video so we presume it was able to drive off as per normal so why was it even in the emergency lane to cause the emergency braking situation in the first place?

And lastly, the Mazda. As human beings we have empathy so it feels bad to say the SUV is wrong for stopping the car for his wife. But the reality is, it’s simply not really a good enough reason to stop on the emergency lane because the car was mechanically fine, so it’s against the law.