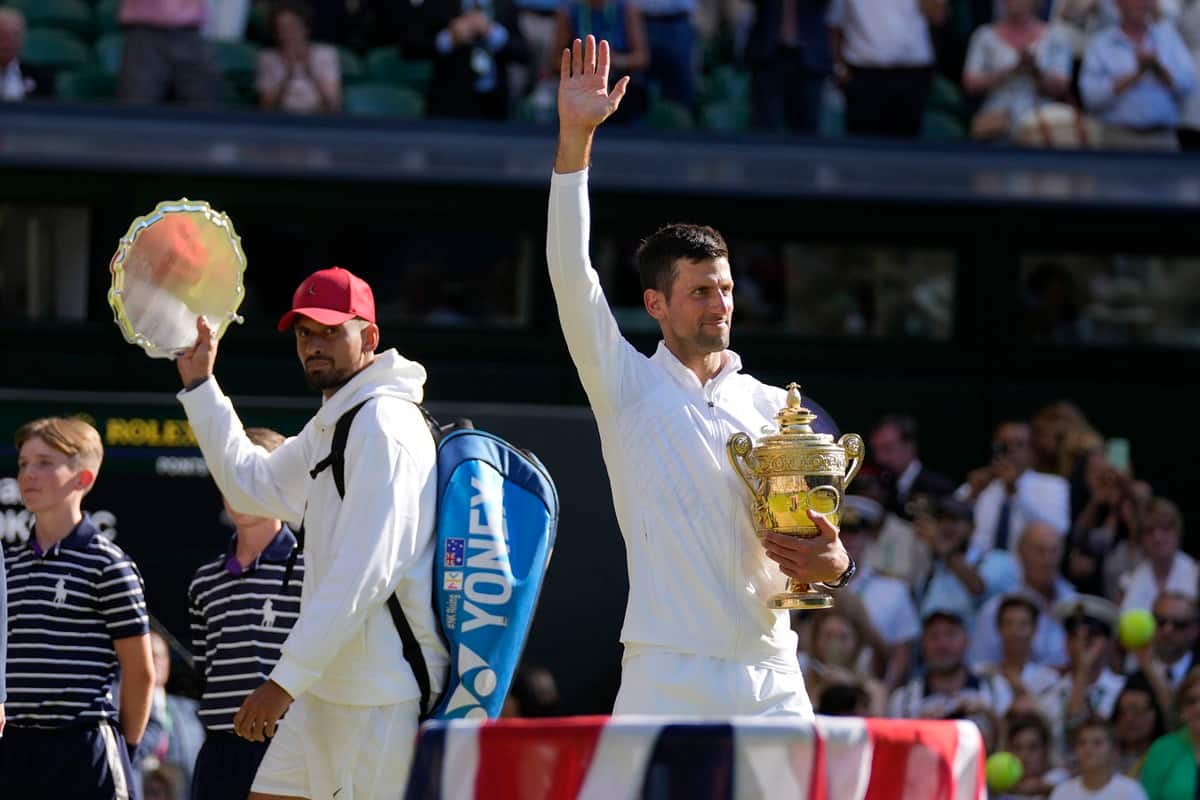 Novak Djokovic waited. He waited for Nick Kyrgios to lose focus and lose his way. Waited to find the proper read on his foe’s big serves. Waited until his own level rose to the occasion.

Djokovic is not bothered by a deficit — in a game, a set, a match. He does not mind problem-solving. And at Wimbledon, for quite some time now, he does not get defeated.

Djokovic used his steady brilliance to beat the ace-delivering, trick-shot-hitting, constantly chattering Kyrgios 4-6, 6-3, 6-4, 7-6 (3) on Sunday for a fourth consecutive championship at the All England Club and seventh overall.

“Every single time, it gets more and more meaningful and special,” the top-seeded Djokovic said.

“It always has been, and will be, the most special tournament in my heart. The one that motivated me and inspired me to start playing tennis in a small little mountain resort in Serbia.” He extended his unbeaten run at the grass-court Grand Slam tournament to 28 matches and raised his career haul to 21 major trophies, breaking a tie with Roger Federer and moving just one behind Rafael Nadal’s 22 for the most in the history of men’s tennis.

Among men, only Federer, with eight, has won more titles at Wimbledon than Djokovic. In the professional era, only Federer was older (by less than a year) than the 35-year-old Djokovic when winning at the All England Club.

Kyrgios was terrific at the start Sunday, almost perfect in the first set, with 11 aces before he made a second unforced error. Could it last, though? There were two particularly key moments, ones that Kyrgios would not let go as he began engaging in running monologues, shouting at himself or his entourage (which does not include a full-time coach), earning a warning for cursing, finding reason to disagree with the chair umpire he fist-bumped before the match, and chucking a water bottle.

In the second set, with Djokovic serving at 5-3, Kyrgios got to love-40 — a trio of break points. But Kyrgios played a couple of casual returns, and Djokovic eventually held.

When that set ended, Kyrgios waved dismissively toward his box, sat down and dropped his racket to the turf, then groused, to no one in particular: “It was love-40! Can it get any bigger or what?! Is that big enough for you?!” And then, in the third set, with Kyrgios serving at 4-all, 40-love, he again let a seemingly sealed game get away, with Djokovic breaking there.

The 40th-ranked Kyrgios was trying to become the first unseeded men’s champion at Wimbledon since Goran Ivanisevic in 2001. Ivanisevic is now Djokovic’s coach and was in the Centre Court guest box for the match.

Kyrgios, the 27-year-old Australian, had never had been past the quarterfinals in 29 previous Grand Slam appearances — and the last time he made it even that far was 7 1/2 years ago.

Still, his talent is unmistakable. But over the years, Kyrgios has drawn more notice for his preference for style over substance on court, his tempestuousness that has earned him ejections and suspensions and his taste for the nightlife.

During the past two weeks alone, Kyrgios racked up $14,000 in fines — one for spitting at a heckling spectator after a first-round victory, another for cursing during a wildly contentious win against No. 4 seed Stefanos Tsitsipas in the third round — and caught flack for wearing a red hat and sneakers before or after matches at a place where all-white clothing is mandated.

Word also emerged that he is due in court in Australia to face an assault allegation.

On Sunday, Kyrgios tried shots between his legs, hit some with his back to the net, pounded serves at up to 136 mph and produced 30 aces. He used an underarm serve, then faked one later.

For all of the significant records and other factoids logged in the 560-page Wimbledon Compendium — including categories such as “ambidextrous players” or “runners-up who wore glasses in a final” — no mention is made of “underarm serves in a gentleman’s final,” but it seems safe to say that was a first.

All players representing Russia or Belarus were banned by the All England Club because of the war in Ukraine; among the men that kept out of the field were No. 1-ranked Daniil Medvedev, the reigning U.S. Open champion, and No. 8 Andrey Rublev. In response, the WTA and ATP professional tennis tours took the unprecedented step of revoking all ranking points from Wimbledon.

A woman who was born in Russia but has represented Kazakhstan for four years, Elena Rybakina, won the women’s trophy Saturday with a 3-6, 6-2, 6-2 victory over Ons Jabeur. It was the first Wimbledon title match since 1962 between two women making their Grand Slam final debuts, and Rybakina, at No. 23, is the second-lowest female champion at the All England Club since WTA computerized rankings began in 1975.

There’s more: Federer missed the tournament for the first time since the late 1990s because he is still recovering from a series of operations on his right knee. The No. 2 man in the rankings, Alexander Zverev, sat out after tearing ankle ligaments at the French Open. Three of the top 20 seeded men, including 2021 runner-up Matteo Berrettini, pulled out of Wimbledon after it began because they tested positive for COVID-19.

And Nadal withdrew before he was supposed to face Kyrgios in the semifinals, the first time since 1931 that a man gave walkover at Wimbledon in a semifinal or final.

Djokovic and Kyrgios have not always gotten along.

Kyrgios was quite critical of Djokovic publicly until he became one of the earliest voices backing the Serbian during the legal saga that played out before the Australian Open in January, culminating in Djokovic being deported from that country because he is not vaccinated against COVID-19 (which also might prevent him from participating in the U.S. Open in August).

That apparently helped create a détente of sorts; Kyrgios used the term “bromance” to describe their relationship status. They kidded around via social media on Saturday, trading messages about heading for drinks or dinner, with the winner footing the bill.

“He’s a bit of a god, I’m not going to lie,” Kyrgios said during the trophy ceremony.

“I thought I played well. You’ve won the championship I don’t even know how many times.”