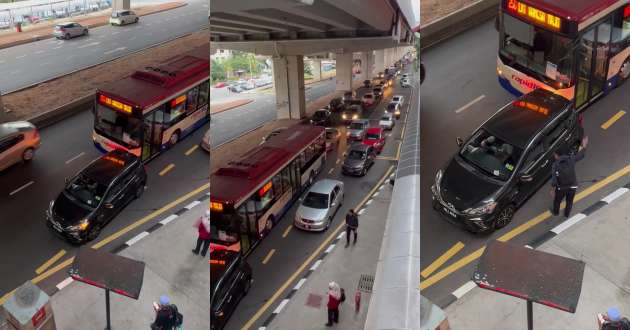 Stopping your car in a place you’re not supposed to can inconvenience other motorists on the road, which is exactly what happened in a video posted on Facebook by Philip Tay. In the clip that clocks in at one minute and 15 seconds, a driver of the Perodua Myvi was seen holding up traffic at a train station, presumably waiting for a passenger.

Most train stations have dedicated drop-off/pick-up areas so as not to disrupt traffic flow when buses and cars use them. In this case, the Myvi driver decided to stop outside the designated zone, causing a small traffic jam in the process.

Even with horns blaring from the bus and other cars, the driver stayed put and refused to budge. It is at the 25-second mark that a man walks over and tells the driver to get a move on and stop holding up traffic.

You might think that’s the end of this episode, but the driver merely inches forward a little before stopping again! The person that told the driver off earlier comes back to do the same thing, with horns blaring from vehicles yet again. By the end of the video, we can see the Myvi has moved further forward but is still stopped along the side the road.

It’s clearly visible in the video that the road has yellow lines, and according to the road transport department (JPJ), motorists are not allowed to stop on them. Always be aware of where you’re going to stop your car and be considerate to other motorists on the road.