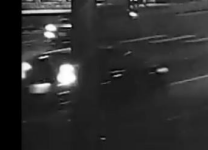 On August 13 at 1:37 a.m., a driver in a car described as a small, dark-colored SUV hit a woman as she was crossing the intersection of University Avenue and Vermont Street in the Hillcrest neighborhood, according to a press release from San Diego County Crime Stoppers. The vehicle, possibly an older model Honda CRV, was traveling east on University Avenue.


Reward offered in search of woman suspected of 2020 murder

The victim was transported to a local hospital to be treated for serious injury to her hand.