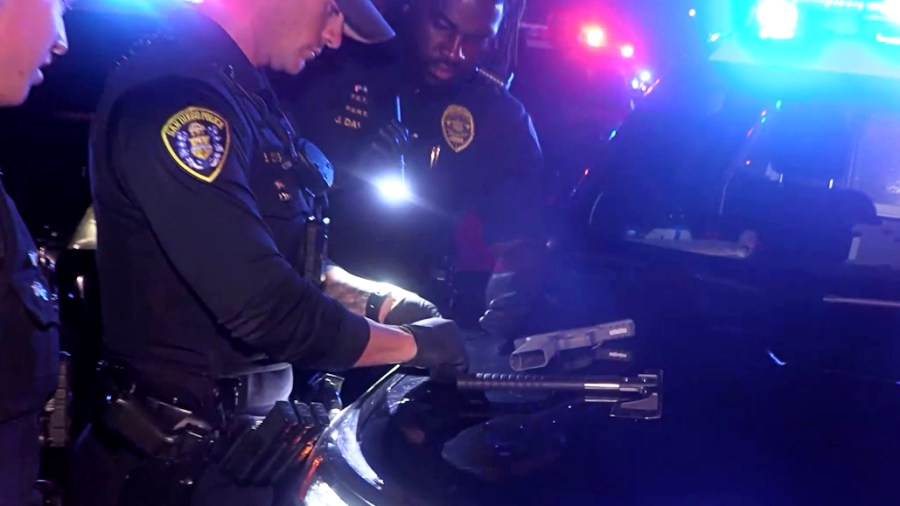 SAN DIEGO — Police broke up a large party near San Diego State University early Saturday morning, finding a hatchet and a handgun left behind after a fight at the gathering.

Officers arrived at Saturday’s party shortly after midnight, finding about 150 people gathered at an address on College Avenue just south of Montezuma Road, a San Diego Police Department spokesperson confirmed by phone. The watch commander said a fight broke out at the party, one of several happening in the area at the time.

Video from OnScene TV showed paramedics loading a young man into an ambulance, but police did not provide any details about his injuries and whether he was a victim in the fight.

The video also showed police discovering a hatchet and a handgun lying in some bushes near the party. Officers picked up the weapons and examined them on the hood of a police SUV while others interviewed party attendees.

Two men were placed in handcuffs and put in police vehicles, the video showed, but the watch commander did not have information about their potential charges.

The fight at the gathering is the latest example of a party in the College Area ending in violence. In another recent incident, a police spokesperson told FOX 5 that staffing shortages can make it more difficult to respond to the area on busy weekends.

After an 18-year-old was shot and killed leaving a June party nearby, neighbors told the San Diego Union-Tribune they were worried about what they perceived as slow police response times to the area.