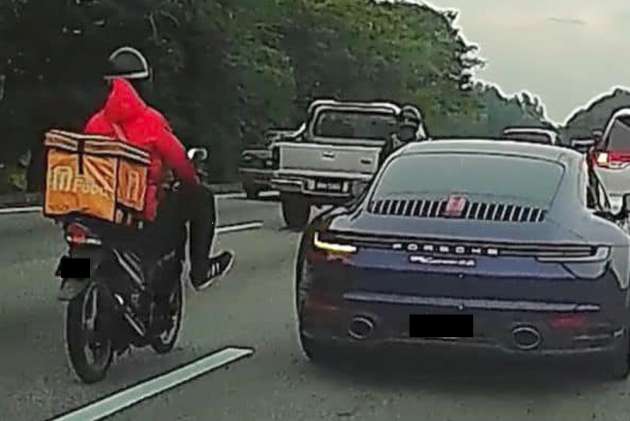 Lane splitting accidents involving motorcycles and cars are not uncommon, but this one is unique, and caught on camera. In a short video clip uploaded to the DashCam Owners Malaysia FB page, a Shopee rider can be seen kicking off the left side mirror of a Porsche 911 attempting to do a slow lane change.

The car is on the right most lane of the highway, and begins indicating before starting to make the lane change to the middle, gingerly at that, given that bikes are whizzing past in lane splitting fashion. Two bikes speed past, the second doing a tiny, almosy imperceptible, evasive maneouvre to swing the bike wide to get further clearance from the car.

The third bike travelling in the channel, however, approaches the Porsche without slowing down. As the biker, which can be identified as a Shopee delivery rider, reaches the vehicle, he sticks out his right foot and aims it at the side mirror. The speed of the impact takes the side mirror off, and the biker continues on his merry way.

While no one was injured in the incident, the biker’s action does constitute an offence, essentially for driving (or in this case, riding) recklessly and causing damage to another vehicle in the process. Whether anything comes of it remains to be seen, of course, but for now, it has been an expensive day out for the 911.

Incidents like these are sure to happen again, given the regularity of bikes performing lane splitting movement in heavy traffic. The action itself is not an issue, but most times, bikes seem to think that they own that passage, speeding along without fear of consequence, tooting their horn (sometimes, almost angrily, you feel) to inform those ahead that they’re coming through.

Close calls happen, and drivers should be familiar with the glare or verbal tell-off from bikers for forcing them to slow down, impeding their progress. We’re sure many of you have had such experiences with lane splitters, especially during rush hour periods.