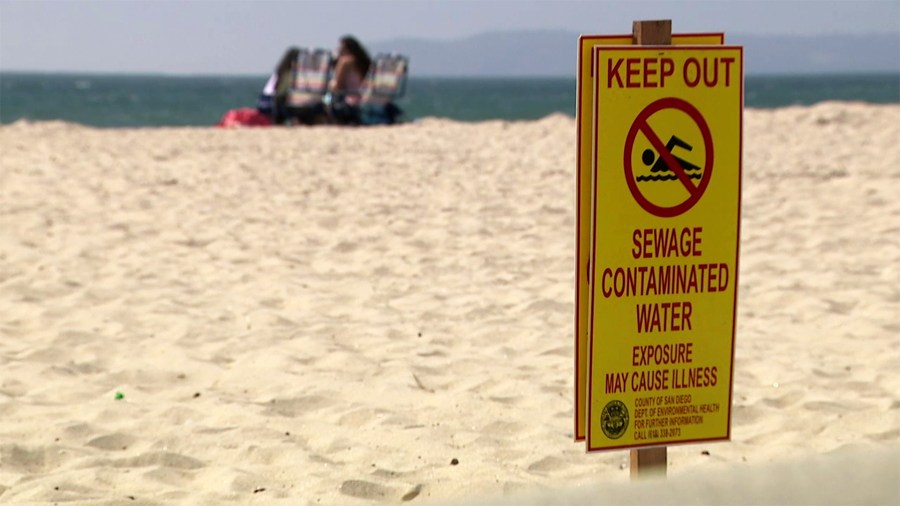 IMPERIAL BEACH, Calif. – In the heat of the summer on some of San Diego County’s most beautiful beaches, the water is off limits or under a warning due to contamination.

It’s a familiar problem in a stretch of water running from Imperial Beach up to Coronado, in large part due to a Mexican sewage treatment plant that’s no longer functioning. The result has hit the Imperial Beach community hard in recent years as residents routinely are urged to avoid the water by bright yellow signs with red lettering acknowledging the water is contaminated by sewage.

Armed with new procedures and urgency, the International Boundary and Water Commission has kept outflows of sewage from pouring down from the Tijuana River Valley to nearly nothing since the spring.

But the water still remains contaminated, as determined by the county’s new measurement system.

Starting this spring, San Diego County officials rolled out new water testing technology known as droplet digital polymerase chain reaction, or ddPCR. Older tests were the result of culturing water samples in county labs for periods of 18 to 24 hours, according to KPBS. Officials were able to determine if the water was unsafe for humans if bacteria grew in the samples.

Upon its launch, the ddPCR method was billed as a faster and more accurate way to measure water quality, the Union-Tribune reported.

“Faster results are going to allow the County to issue or lift beach advisories on the same day samples were collected,” County Board of Supervisors Vice Chair Nora Vargas said in a May announcement at the Imperial Beach Pier. “And it reduces the time the public could unknowingly be at risk and … when the water is contaminated.”

Samples collected in the morning at area beaches ultimately determine the level of contamination and inform advisories, warnings and closures posted on a county website.

As of Friday, three closures are in effect: The Tijuana Slough Shoreline, Crown Cove and Sweetwater Channel and Pepper Park. The first has been in effect since Dec. 8, 2021 while the others are from a sewage spill at Cars Way in National City when about 1,000 gallons got into the channel that flows into San Diego Bay.

Additionally, a warning is in effect for the Imperial Beach Shoreline up to about 500 feet north of Carnation Avenue, the website shows.

Some local politicians say the county’s new warnings and closures are confusing. They argue the county’s old system would have kept the beaches open nearly every day this summer.

Dedina suggests the county should “delay the testing, go back to the old testing or do a better job of beta testing” the system. He wants county officials to clarify any vague language that has left some residents confused while others outright ignore the results of the new water system.

Some $300 million recently was earmarked by the U.S. Environmental Protection Agency to stop the sewage flowing across the border, but the money isn’t expected to start fixing the problem for about three years.

For now, officials like Dedina want Mexican authorities to do everything they can to stop the flow of sewage.

“Work with us to really get the federal government to pressure Mexico to do something for us now, not in two or three years,” he said.