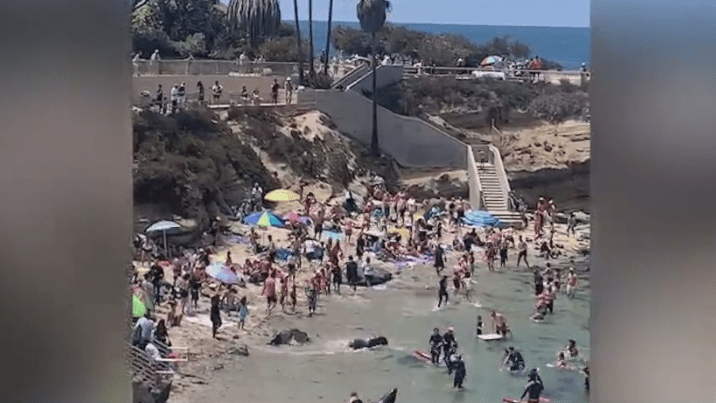 SAN DIEGO – San Diego is known for many things including the area’s incredible beaches, near-perfect weather, Comic-Con, and Balboa Park, just to name a few. But “America’s Finest City” is also known for a large population of an adorable and incredibly protective creature: sea lions.

In a now-viral video posted to Tiktok, two ferocious sea lions can be seen taking on a large crowd of La Jolla Cove visitors who were getting a little too close for comfort to the animal locals.

Charlianne Yeyna, a Riverside County resident visiting San Diego for the weekend, said that she decided to pick up her phone and start recording after noticing a woman attempting to take a picture of one of the sleeping sea lions. According to Charlianne, the sea lion woke up mid-picture and began to chase the woman in the direction of the large crowd on the beach.

At least two dozen people can be seen running from the two sea lions as the animals quickly waddle across the sand toward the crowd.

Since being posted Saturday evening, the video has amassed more than 7.3 million views and 970,000 likes on the social media app.

Charlianne said that despite their aggressive approach, the animals went back into the water and no one appeared to be hurt.

According to the Dolphin Research Center, beaches and coves in Southern California are increasingly populated by sea lions during the months of May through July due as this is the prime breeding time for the aquatic animals.