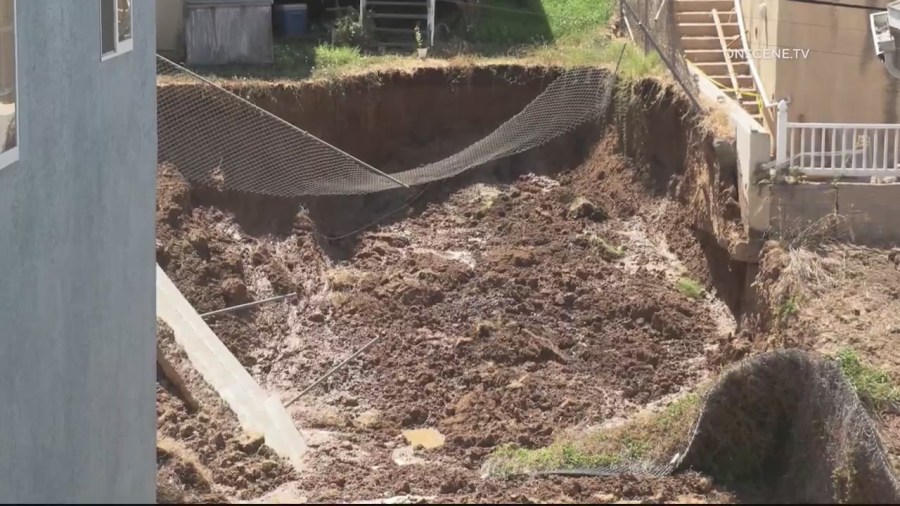 SAN DIEGO — San Diego Fire-Rescue Department has reported that four homes on Trinidad Way in the Valencia Park neighborhood are at risk of collapsing or getting mud into their homes.

Fire officials say a water leak caused a retaining wall to break behind a home. It caused a mudslide between two rows of homes.

“Every little step I took back, the ground was going…it was the most scariest thing in the world, went and got my daughter, told her we need to get out this house,” said Velvet, who lives on Trinidad Way.

Velvet said she was home at the time when San Diego Fire-Rescue Department reported a water leak on her street. It caused the retaining wall behind Velvet’s home to break. Then a mudslide happened.

“Took my dog outside and the next thing you know I see the fence break, and I’m like dang, did I miss an earthquake,” Velvet said.

“Right now, that’s tens of thousands of pounds of dirt that are sliding and we are watching actively move  into those four homes areas,” said Chris Babler, San Diego Fire-Rescue Battalion Chief.

Velvet’s home could collapse, according to fire officials. Her home has a red sign on her front door that reads “UNSAFE DO NOT ENTER OR OCCUPY,” and said the city shut off all her utilities.

Velvet said the home has been in her family for 57 years, when her mom bought it at 19 years old.

“It means a lot to us, she kept it in the family,” Velvet said.

Chris Mason, who lives next door on Trinidad Way, said there have been water leaks and sewage problems in the neighborhood before. He is planning to stay in a hotel for a few days. He said his utilities are shut off too.

“Yeah, this is kind a shocking to wake up to, house is sinking down into a ravine. Wow,” Mason said.

The neighbor around back, Joe Reyna, caught the whole thing on his surveillance camera.

“Then I looked out the window, and I saw the whole mountain coming down,” Reyna said.

The mudslide took out a retaining wall he built last year, when he said water was getting into his backyard. He and his wife are on standby for evacuation.

The City of San Diego said if there is a red tag on the door, the owner should work with an engineer firm to get work permits with the city. If there is a yellow tag, people can go into certain areas. The city has not disclosed the cause of the leak, but said in general, if the water leak comes from city property, the city will work with owners. The city said if the leak is on private property the owner would take care of it.