Woman speaks out on investigation 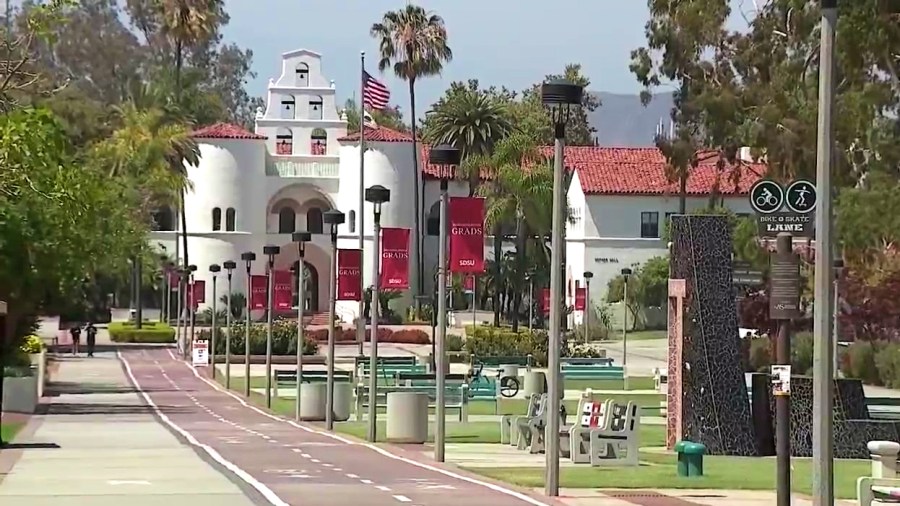 SAN DIEGO — An 18-year-old woman who accuses San Diego State University football players of raping her at a party last year spoke to FOX 5 about the allegations Wednesday, questioning the school’s response.

The woman, who spoke anonymously, and her attorney, Dan Gilleon, criticized the timeline of a newly launched investigation by the school.

SDSU’s probe comes about nine months after the then-17-year-old says she was raped by the Aztecs players at an off-campus party in October 2021. School officials say they delayed their own investigation at the request of police.


Some SDSU students say they received surprising bill from university

The young woman spoke to FOX 5 Wednesday, recounting her memory of the Halloween party. She said she was given a drink from a man at the party and was taken to a bedroom, where there was a group of football players. She said she was then raped, going in and out of consciousness.

“All of my piercings were ripped out, I was bleeding. It lasted about an hour, maybe a little bit more,” she said. “I stumbled out of the room and I was crying and I had blood everywhere.” She said she found her friends and “told them I was just raped.”

She said she went home, and the next day, she and her friends went to the police department to file a report, where she said she waited six hours.

“I gave my costume to the officer. It was covered in blood, so I was hoping they would be able to find some DNA on it. I don’t know if they did, I’ve been kind of kept in the dark on my criminal case,” she said.

She said after filing the police report, she went to Rady Children’s Hospital to complete a SART, or rape kit, as it’s commonly called.

“Which was really, really rough, they took swabs of every part of me — inserted swabs, pregnancy tests, STD tests, blood tests,” she said. It lasted overnight and she is still awaiting the results from October.

After the woman’s story came to light, the university says San Diego Police Department “formally requested that the university not initiate a separate investigation or take other actions – including conducting interviews – which could and would compromise its criminal investigation.”

“The university has been exploring potential policy violations and will be reviewing all known and confirmed information and evidence through the lens of SDSU and CSU policies,” according to a page on the school’s website, which is dedicated to the university’s statements in response to this incident.

“SDSU isn’t doing anything other than protecting its seeming paramount interest, which is this football team. This is a winning team, this is a big team,” Gilleon said. “This whole investigation kind of went silent right around the time the sports news was covering the draft picks.”

The names of the football players the woman has accused have not been released, but the young woman said she knows who they are.

“The criminal case dragging on for so long with no outcome. I feel like I’ve been having to deal with the consequences of their actions — the suspects’ — while they haven’t had to face any consequences at all yet,” she told FOX 5.

Gilleon said he plans to file a lawsuit in the next 45 days, and the football players are expected to be named.

Gilleon claimed SDPD violated his client’s victim’s bill of rights, and he plans to file a claim against the police department as well.

The San Diego Police Department confirmed Wednesday this is still an active investigation and it has not been submitted to the district attorney’s office. SDPD said it still encourages anyone with information to contact SDPS or Crimestoppers to remain anonymous.