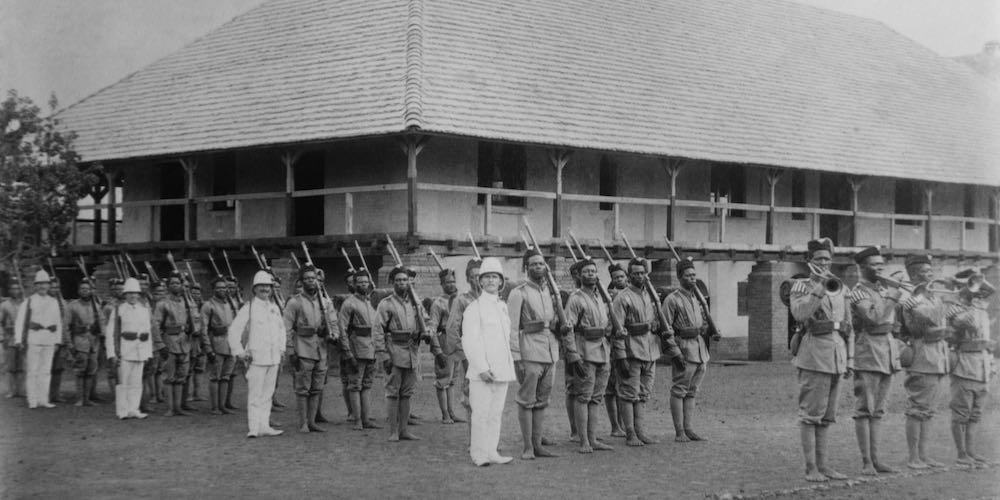 In his 1950 Discours sur le colonialisme, postcolonial theorist Aimé Césaire famously argued that the Holocaust was simply colonialism brought to European shores. What Europeans had been doing to developing nations for centuries was finally brought to the homeland for all to see.

Such a view has come to dominate much of both academic and popular discourse throughout the West.

In fact, Césaire’s thesis has been expanded by many contemporary critics of colonialism to argue that the Holocaust is simply Western civilization writ large; the large-scale executions of civilians on European soil, this thesis posits, represents the heart of what Europe is.

One scholar who has challenged this view is Portland State University’s Bruce Gilley. An accomplished scholar, Gilley gained national notoriety in 2017 for his article “The Case for Colonialism,” which was retracted from Third World Quarterly after the author as well as the journal’s editors received violent threats. In “The Case for Colonialism,” Gilley argued that colonialism was a largely liberal and beneficial phenomenon. Such an argument is anathema in a Western university setting, where colonialism is considered irredeemably evil.

Gilley followed up his article with a book, The Last Imperialist: Sir Alan Burns’s Epic Defense of the British Empire, which praised the British colonial administrator for his tolerance, universalism, and generosity to the people he governed in the Americas and Africa.

Gilley has now penned another work, which is sure to stir similar controversy. Provocatively titled In Defense of German Colonialism: And How Its Critics Empowered Nazis, Communists, and the Enemies of the West, Gilley’s most recent work is derived from a talk that he gave in Germany in 2019 in which he praised elements of German colonial history. The talk drew a firestorm of outrage and protests, although the German public was receptive, prompting Gilley to publish Verteidigung des deutschen Kolonialismus in 2021.

In Defense of German Colonialism is an expanded and revised version of Gilley’s Verteidigung. Like his Last Imperialist, Gilley uses German colonialization as an example of his central thesis in “The Case for Colonialism.” Gilley marshals examples from colonized peoples who praised German rule for bringing order, stability, and peace to their homelands. Gilley notes that German leftists erected a plaque in 2019 in honor of Martin Dibobe, an African from German Cameroon, who came to Germany in 1896 and worked on the Berlin train system. Dibobe, far from considering himself a victim of colonization, in fact praised Germany civilization and the positive effects Germany had wrought in his home country.

German colonialization is often considered among the worst of European colonial efforts. Gilley demonstrates that this demonization of Germany began as early as the first World War with works such as the 1918 Prussian Lash in Africa, written by a British colonial official who went by the pseudonym “Africanus.” At the same time, anthropologists and researchers who interviewed members of former German colonies discovered that the natives not only praised German rule, but occasionally considered German rule as being superior to that of the other European powers. According to Gilley, the Germans, unlike the British and the French, attempted to promote education in native customs, language, and culture. In Defense of German Colonialism fills in a gap in contemporary colonial discourse—especially in the Anglophone world, which is largely focused on British imperialism.

Gilley argues that the Germans were motivated in their colonial efforts by the “Spirit of Berlin,” which was forged at an 1884-1885 winter conference commissioned by Otto von Bismarck. This “Spirit of Berlin” would be marked by just and efficient colonial administration. Nonetheless, as Gilley points out, Bismarck was a reluctant colonialist. Germany itself was largely disinterested in colonialism—a fact that, as Gilley notes, chafes against the Marxist reading of colonialism as being an outgrowth of capitalism. Germany’s industrial and economic strength would, according to the Marxist reading, necessitate an aggressive colonial expansion. In contrast to the colonial efforts of Great Britain, German business people were principally concerned with trading with Europe and America. Gilley argues, on the other hand, that this was not the case, and that Germany had a more noble impetus to colonial expansion: the improvement of the lives of the colonialized people.

In Defense of German Colonialism also notes the bitter irony that many of the West’s most virulent critics decide to live in often plush situations in Western cities—Gilley points out that anti-colonialist activist and native Burundian Arlette-Louise Ndakoze would rather live in the Germany she has spent her life criticizing than in her home country. Many of these anti-colonial thinkers from former colonies argue that living in Europe is for them a form of reparations. Gilley also takes aim at German scholars such as Jürgen Zimmerer, who have made it their life’s work to depict German colonial activities in the worst possible light and to stifle any dissenting scholarly opinion. Gilley makes special note that many of these scholars, following Aimé Césaire’s example, attempt to link German colonial activity to the Holocaust.

Gilley further suggests that German colonial rule was much more just than the premodern tribalism that preceded it or the often-corrupt Marxism that followed it. Gilley uses the example of the last governor of German Cameroon, Heinrich Leist, who had some rebellious natives whipped. Leist was punished by German officials and removed from his governorship. Moreover, the event prompted a renewal of the labor code in German colonies. Gilley’s point is that this self-criticism and attempt to provide universal justice is what distinguishes the West from various totalitarian or premodern alternatives.

Gilley also demonstrates that anti-colonial narratives rely upon a purported “moral” framework of research as opposed to a scientific, rational, and just one. In this alleged moral framework, any and everything done by the colonizers is wicked. If Germans attempted to teach Africans German, they were imposing an artificial colonial culture. At the same time, if Germans promoted Swahili and indigenous forms of culture, they were guilty of cultural appropriation.

Gilley further argues that Edward Said’s Orientalist thesis fails to grasp German colonialism. As Said himself admits, Germany’s study of the Orient in the 19th century was exceptional, with many important studies of the East being made by German thinkers. Yet, contrary to Edward Said’s argument, German study of the Orient did not accompany colonialization of the Middle East and North Africa. Germany’s colonial efforts were focused on Africa and the Pacific. Thus, a people can, pace Said, study a country without colonizing and dominating it.

Gilley further shows that German National Socialism was not an outgrowth of colonialism, as Aimé Césaire and others have argued. In fact, the Nazis had much more in common with anti-colonial Third World ethnonationalist movements than with colonialists. Both German National Socialists and some anti-colonial Arab nationalists saw a mutual enemy in the Jews. Hitler and anti-colonialists likewise had a bitter hatred of the British Empire. Moreover, even later left-wing anti-colonial theorists such as Franz Fanon allegedly were affected by Nazi writings. Gilley also notes that the Nazis were much more concerned with colonizing Eastern Europe and argues that Hitler’s threats to seize colonies in Africa were largely bluster. Gilley does acknowledge that a Nazi colony would have been theoretically far worse than one shaped by 19th-century liberals. This is the heart of Gilley’s argument: that colonialism was shaped by Western impulses toward humanism, not will to power domination.

In Defense of German Colonialism is ultimately a work, like The Last Imperialist, which argues that liberal humanitarianism—informed by Christianity—is at the heart of modern Western civilization. Many—but not all—colonial administrators sought to bring these liberal values to the peoples of Developing Nations. In Gilley’s view, a host of authoritarians—of both the right and left and both within and outside the West—have made it their life’s work to deconstruct Western modernity while, at the same time, benefitting from it. Gilley acknowledges that colonialists committed individual acts of injustice and racism, but he sees these acts as atypical. Some historians may, of course, take issue with this assessment. In Defense of German Colonialism is principally a polemic work intended to counter what Gilley sees as bias among academics who only acknowledge colonialism’s ills. Whether one agrees with Gilley’s arguments or not, his desire for honest scholarly inquiry is greatly needed in a world that now defines itself as “post-truth.”

The F-Word in Italy – Alberto Mingardi