European Divisions Across the Channel – 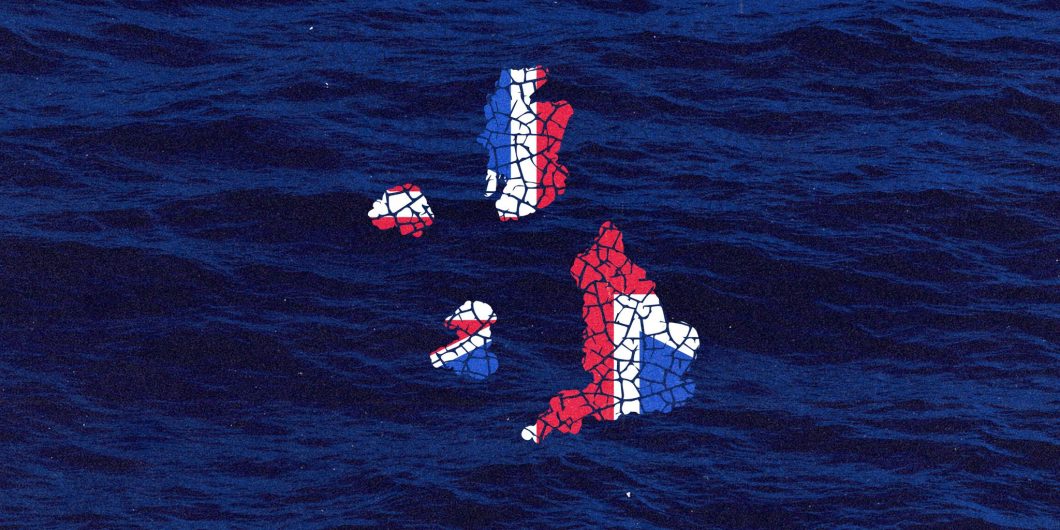 One thing that unites all the current nationalist movements in states such as the United Kingdom, Belgium, and Spain is their seemingly paradoxical desire either to re-join or to remain in a supranational organization dedicated to the extinction of national sovereignty, in a project of ever closer union that renders previously national governments the equivalent of provincial governments.

If the recent history of previous attempts at such large supranational entities in Europe is anything to go by (though it may not be, history is not merely an exact repetition of previous patterns), such an entity will in the end provoke a violent nationalist backlash. As yet, however, there are only faint rumblings of this, earth tremors rather than earthquakes: but if, for example, one reads the book about Franco-German relations by Jean-Luc Mélenchon, the perennial and charlatan leftist candidate who is nevertheless a significant political figure in France, one has the impression, so virulent is its Germanophobia, that it was written circa 1915. (In this case, the term phobia is not an exaggeration.)

What does the affection for the European Union of the various nationalist movements signify? (I am speaking here of the leaders, not the followers.) A cynic might say that it indicates a desire by the political class of the various nations to climb aboard the pleasant and lucrative gravy train that is the European Union’s administrative apparatus, which acts as a kind of insurance policy and pension fund for politicians who, having ascended the greasy pole, fear to descend it. They seek political importance that is everlasting, as it were, and not dependent upon the whims of a despised electorate that is changeable, cannot make up its mind, and does not know what is good for it. What is attractive about the EU for so much of the political class is its abolition of politics.

The various nationalisms have this Europhilia in common, despite their rather different situations at home. For example, the Scots, the Welsh, and the Catalans are in the numerical minority within their current states, the Flemish in the majority. The Flemish and the Catalans are richer than the other groups in their country; the Welsh are poorer, and the Scots are in an ambiguous position, in that their economic product per head is similar to that of the country as a whole, but this is partly because of subsidies to fund its exceptionally bloated governmental activity, as Helen Dale has noted about its pension system.

The motive force for much of this nationalism is resentment, which is one of the few emotions that can become genuinely chronic and therefore an inexhaustible and invaluable source for achieving political power. This is not to say that there can be no justification for resentment. For example, I have a Welsh-speaking friend of my age who remembers being beaten with a cane for speaking Welsh in the school playground, a common practice at the time. This has now been replaced by the teaching of Welsh to English speakers, but I think it is fair to say that the Welsh are still regarded condescendingly by their English neighbours, often in a very wounding way.

During the Franco years, Catalan was prohibited as a public language, with an inevitable reaction afterwards: once at an exhibition in Barcelona, I was surprised that all the captions were in Catalan alone, though foreign visitors were much more likely to know Spanish—or Castilian, as perhaps it should be called. Of course, if you know French and Spanish, Catalan presents few difficulties, but this still struck me as petty and small-minded, even if understandable.

The situation in Belgium is complicated. For much of its history as a state, the Walloon minority was not only economically but culturally dominant. Even the Flemish aristocracy and upper classes spoke French, Flemish (which is Dutch) being regarded as the language of the peasantry. In the First World War, the officer class was entirely French-speaking and the common soldiers Flemish-speaking, leading sometimes to fatal misunderstandings. But the economic centre of gravity of the country has changed completely, the coal, iron, and steel industries of French-speaking Wallonia having disappeared, such that Wallonia is now, in effect, the welfare dependent of Flanders. Dependency is not a happy relationship either for the one who pays or the one who is paid. The result is that by far the most clear-cut language boundary in continental in Europe now is that between Flanders and Wallonia: not a word of French in the former, not a word of Dutch in the latter (Brussels excepted). I have often been unable to find a French-language newspaper in Flanders, let alone a book, and people there prefer to be addressed in English than in French. Again, I understand this, but I find it small-minded.

The Scots again are in a different situation. Since Union in 1707, they thrived as never before. Doctor Johnson apart, they were relatively free of prejudice against them and indeed provided a disproportionate contingent to the British ruling class. The Scottish Enlightenment would probably not have taken place without the Union, so the Scots have to work harder than other nationalists to work up resentment, often invoking bogus historiography. Once in a brief discussion on the radio with a member of the Scots National Party, I had to point out that the Scots were much more colonisers than colonised, empire-builders than victims of empire, as my interlocutor had tried to make out in order to justify his feelings of resentment. But the latter is a very versatile emotion: once it is desired, it can attach as easily to benefits received as to harms inflicted.

Nor can it be said that Scottish nationalism is a friend to freedom, at least of the kind to which we have been accustomed. The Scottish government’s Hate Crime and Public Order Act, and the supposed justification for it, is a toxic mixture of fascism and nannying, displaying no regard at all for freedom. Shortly after the referendum on independence, I addressed a group of doctors in Edinburgh on a medical subject, and they described to me the atmosphere of intimidation that had preceded the referendum. One achievement of the Scots nationalists is that they have managed to stir what never existed before: anti-Scottish feeling in England. From their point of view, of course, this is all to the good.

As Helen Dale has observed, Scottish independence, after more than three centuries of successful integration, would involve formidably complex and probably acrimonious negotiations. If Scotland joined the EU, would there be a hard border between Scotland and England? Some people suggest that Scotland would not be permitted to join the EU for economic reasons, its deficit being so vast in relation to its economy and likely to grow, at least in the short term: but the EU is a political project, not an economic one, and politics might easily trump economics. The break-up of the United Kingdom would be advantageous to the EU politically, though Spain might object because Catalonia and other regions of Spain could try to follow suit. The Spanish might therefore veto any accession of Scotland to the EU.

There are other problems, including the legitimacy of any vote for independence. An eighth of all Scots living in the United Kingdom live in England. In all likelihood, most of them would vote against independence if given the vote (certainly all the Scots I know would), probably enough to swing the vote. But will they be given the vote, and if not, will they be subsequently considered Scottish citizens, or will they, as Brahmins do if they cross the sea, lose caste and become stateless or, faute de mieux, English? On the other hand, if they are Scottish citizens, why were they not given the vote? The answer to this question would be clear: because they would have voted the wrong way from the Scottish Nationals’ point of view and spoilt the whole referendum. Thus independence would commence with a problem of political legitimacy.

Given Dale’s analysis of Northern Ireland, I will say little except that it is probable that a reunified Ireland would come to a majority of the English as a relief, both economic and political. Whether it would be beneficial for Ireland is another question.

When I consider political life in the United Kingdom, including the disputes over the relations of its various components, I am struck by how much of it is like the displacement activity of, say, a mouse when cornered by a cat. The mouse begins to wash its paws, since it does not know what else to do in the circumstances. Very little of the political activity has any bearing on the real or deepest problems of the country, among which are a tradition of the low educational and cultural attainment of much of the population, which hampers adaptation in a world of change, which necessitates an extension rather than an intensification of work, and results in the importation of cheap labour, with all the latter’s deleterious, though frequently denied, social effects.

There is also the problem of virtually legalised corruption that has rotted British public administration more thoroughly than anywhere else known to me. The public purse is now a trough at which a nomenklatura can feed, incompetent except in the dark arts of bureaucracy. If anything, the assorted nationalists are even worse. United or disunited, the prospect is indeed gloomy for the kingdom.

The Economics of Life –