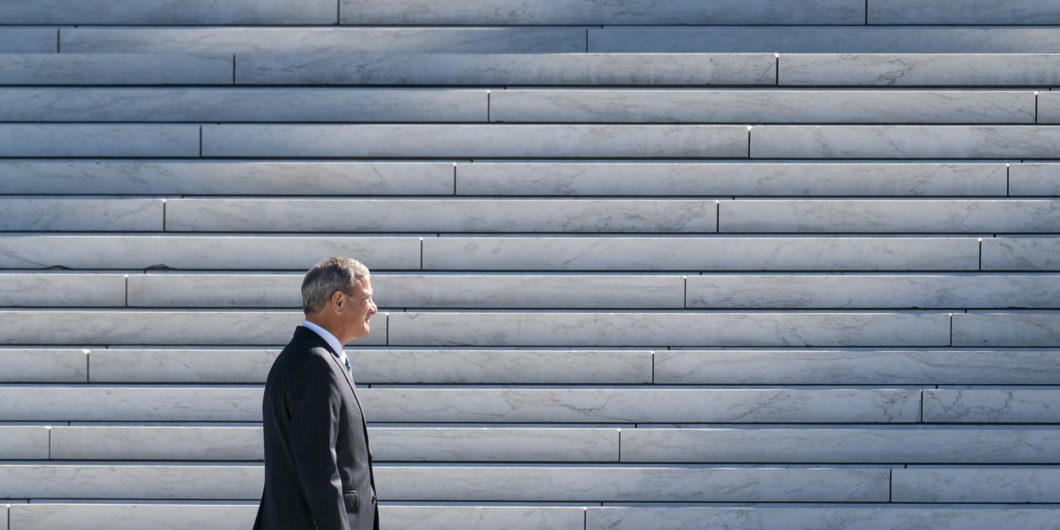 On stare decisis, I think the first issue you look at is whether or not the decision at issue was wrongly decided. I’ve actually never quite understood how you evaluate that. Is it wrongly decided based on legal principles and doctrine when it was decided or—or in retrospect? Because Roe—I mean, there are a lot of cases around the time of Roe, not of that magnitude but the same type of analysis, that—that went through exactly the sorts of things we today would say were erroneous, but do we look at it from today’s—if we look at it from today’s perspective, it’s going to be a long list of cases that we’re going to say were wrongly decided.

Why in the world would the Chief Justice of the United States express uncertainty about how to determine if a case had been wrongly decided? That undermines not just his Court—if the Chief doesn’t know how to do it, how can other justices? —but his own resume: Roberts has voted to overturn precedents, including in major cases like Citizens United.

Moreover, why would he concede that a host of decisions from a particular era were dubious and then imply that those cases should nevertheless be given a pass? That undermines decades of Supreme Court jurisprudence and injures the reputations of those justices. It also suggests that a Court should knowingly perpetuate bad law if it were based on bad reasoning that was in vogue for a time. If followed, that advice would’ve preserved the now-discarded Lochner era precedents or, worse, wrongheaded decisions related to race or eugenics.

What was Roberts trying to do?

With the Dobbs opinions—particularly Justice Alito’s majority opinion overturning Roe and Roberts’ dissenting concurrence—now in hand, we can understand the Chief’s project. We can also better appreciate the intra-Court fights about precedents to come.

As many have observed for years, Roberts seems to believe that he can protect the Court’s public standing through a minimalist approach: by issuing the narrowest rulings possible, encouraging opinions that win as many votes as possible, and preserving as many precedents as possible. However, Roberts now leads a Court with five conservative justices who seem to believe—to varying degrees—that getting the law right is the best way to steward the institution.

Those justices’ reasoning is on a collision course with the jurisprudence of the Warren-Burger era. Though that period’s Court issued some invaluable rulings (Brown v. Board of Education foremost among them), during the 1960s and 1970s, it could also be presumptuous and undisciplined, per Roberts’ comments. The late 20th-century rise of originalism, textualism, and the Federalist Society is best understood as a response to the excesses of that era. As of 2019—prior to Amy Coney Barrett’s replacement of Ruth Bader Ginsburg—one analysis found that the Roberts Court had already overturned or altered 11 decisions from the Warren and Burger Courts.

Members of today’s Court majority were largely shaped by the rise of originalism, and while originalism does not rule out stare decisis, many originalists find many Warren-Burger era precedents not just wrong, but gravely so. Knowing that the majority’s application of its beliefs to the Court’s freewheeling era will lead to disruption, Roberts appears to be searching for a way to slow his colleagues. The first moves of his gambit were claiming confusion about how to assess prior decisions, questioning the propriety of applying today’s methods to yesterday’s reasoning, and subtly warning against a large-scale overruling movement.

We must remember, though, that Roberts has not always deferred to precedent or protected the Warren-Burger era. For instance, just four years ago in Janus v. American Federation of State, County, and Municipal Employees, Council 31 he joined his four conservative colleagues (this is prior to Barrett’s elevation) to overturn the 1977 case Abood v. Detroit Board of Education. Justice Alito’s opinion for the majority stated—foreshadowing his opinion in Dobbs—that Abood should not be preserved by stare decisis because it was “poorly reasoned,” it had proved unworkable, it was inconsistent with a proper interpretation of the Constitution, and the arguments used in its defense had shifted over time.

Whether for constitutional, prudential, or political reasons, Roberts decided that Roe (and its progeny Planned Parenthood of Southeastern Pennsylvania v. Casey) deserved more deference. But that is a heavy lift. Roe exemplifies the flaws of that era. Former Yale, Harvard, and Stanford law professor—and one of the most cited legal scholars ever—John Hart Ely famously called Roe, “a very bad decision…It is bad because it is bad constitutional law, or rather because it is not constitutional law and gives almost no sense of an obligation to try to be.” Alito’s opinion methodically dismantles both Roe and Casey, explaining how they invented a right nowhere in the Constitution, created legislation-like rules, relied on faulty history, shifted legal rationales, and more. But his opinion isn’t simply targeted at poor constitutional law, Warren-Burger at its weakest; it is also originalism at its strongest. It is based on a thorough reading of history, respects the constitutional and statutory text produced via self-government, keeps judges in their lane, uses former Chief Justice Rehnquist’s disciplined Washington v. Glucksberg framework for assessing unenumerated rights, uses disciplined rules for assessing precedents, and more.

In Dobbs, Roberts voted to uphold Mississippi’s 15-week ban (discarding Roe’s viability line), but he would not have overturned Roe-Casey: “I would abandon (the Roe–Casey) timing rule, but see no need in this case to consider the basic right.” His opinion argues that the majority should have ruled more narrowly, preserving the precedents and respecting the moderating force of stare decisis. Alito chides the chief justice for offering a compromise that is as unsupported by the Constitution as Roe-Casey and that was rejected by all three parties arguing the case. Then, after noting Roberts’ attempt at “judicial minimalism,” Alito devastatingly quotes Roberts’ own opinion in Citizens United: “we cannot embrace a narrow ground of decision simply because it is narrow; it must also be right.”

While it might seem that Roberts has lost the Court and that the five-justice conservative majority will continue unwinding the Court’s mistakes expeditiously and without him, three other recent cases suggest that the chief’s influence—or at least his vote—still matter. In each case, Roberts was in the majority when the Court had the chance to overrule a prior decision but demurred.

In last year’s Fulton v. City of Philadelphia, Roberts was able to craft an opinion whose judgment was supported by a unanimous Court. Though the specific issue at hand was whether the City of Philadelphia had violated the religious freedom of a foster-care provider, the bigger question was whether the Court would overturn Employment Division v. Smith, a key precedent opposed by many on the right. Roberts sidestepped that issue by saying Fulton could be resolved without addressing Smith. Justices Alito, Gorsuch, and Thomas wrote separately to say the precedent should be overturned, while Barrett (with Kavanaugh) wrote to suggest that she was almost ready to overturn it but not yet. Roberts’ opinion gave the five-justice majority the result in the case they wanted but avoided, at least temporarily, taking the bolder step.

Three days before the decision in Dobbs, the Court issued its opinion in Carson v. Makin, a religious-exercise case. In similar cases recently, several conservative justices have raised fundamental concerns in concurring opinions about a relevant precedent, Locke v. Davey. It appears that at least three would be open to overruling it. Rather than entertaining a debate about overruling, Roberts’ opinion in Carson cabins Locke’s holding to the specific facts of the case, all but ending its standing as a meaningful precedent. All five members of the conservative bloc signed Roberts’ opinion; none felt the need to write a concurrence further undermining Locke.

Three days after Dobbs, the Court issued its decision in Kennedy v. Bremerton School District. In the case, which was about the right of a public-school coach to pray publicly after a game, the lower court relied on the “Lemon test” from the Burger Court’s landmark 1971 case Lemon v. Kurtzman. For years, that case had been disparaged for distorting First Amendment jurisprudence and for its elaborate test that found little support in the Constitution. Though the Court had largely ceased following Lemon’s rules, it had never been explicitly overruled, meaning it continued to be invoked by lawyers and lower-court judges—hence Justice Scalia’s comparing it to a ghoul stalking Establishment-Clause cases despite being killed and buried. In Kennedy, the six conservative justices, with Roberts, again chose not to explicitly overturn Lemon; instead, Justice Gorsuch’s majority opinion further criticizes Lemon, cites numerous times other opinions criticized it, and says the Court long ago abandoned and replaced it. In her dissent, Justice Sotomayor says that majority overrules Lemon, but given that precedent’s zombie-like resilience, it is more than conspicuous that the majority doesn’t say so.

Though media coverage of Dobbs gives the impression that the conservative-leaning Court will now overturn cases with abandon, these three recent cases show the Court—with some Roberts role—is moving more gingerly. Even when dealing with wrongly decided precedents, the majority will often avoid or delay overturning a case or do so incompletely or obliquely. Many commentators seized on Justice Thomas’s Dobbs concurrence, in which he wrote that the Court should reconsider a host of major precedents that are based on substantive due process. But no other justice signed that opinion, and Alito’s majority opinion said that non-abortion cases were unaffected by Dobbs (“Nothing in this opinion should be understood to cast doubt on precedents that do not concern abortion.”), a point underscored in Justice Kavanaugh’s concurrence.

After its late-term decisions in Dobbs, Carson, and Kennedy, we should have been clued in to three facts. The Court’s five-justice conservative bloc is committed to originalism; precedents from the Warren-Burger era are especially vulnerable given their often weak analysis and reasoning; Roberts and several of the other conservative justices will often find ways to not overturn precedents, choosing instead to move more incrementally.

Indeed, on the final day of this Court’s term, in a 6-3 decision in West Virginia v. EPA written by Chief Justice Roberts, the conservative majority shifted power from the administrative state back to Congress while avoiding overruling the Burger-era Chevron doctrine (that requires deference to executive-branch agencies). Though several justices might be in favor of ending Chevron, Roberts was able to pen an opinion that achieved the originalist goal of reining in regulatory excess through other means: Using the “major questions doctrine,” Roberts won six votes and scaled back the influence of Chevron while stopping short of overturning a 40-year-old precedent.

Next term, we will see these very same dynamics at play in another major case when the Court reconsiders race-based admissions. At issue—as with Roe and Casey—will be a 1970s landmark precedent (Regents of the University of California v. Bakke) and later decisions affirming and adjusting it (Grutter v. Bollinger and Fisher v. University of Texas). Will the conservative bloc overturn those decisions, ruling that they run afoul of a proper interpretation of the Constitution? Or will the Court move in an originalist direction while avoiding the dramatic step of overruling 40 years of jurisprudence?

In this case and others ahead, much will depend on whether members of the conservative bloc choose to go along with Roberts’ minimalism or decide, as they did in Dobbs, that something more confident is warranted.