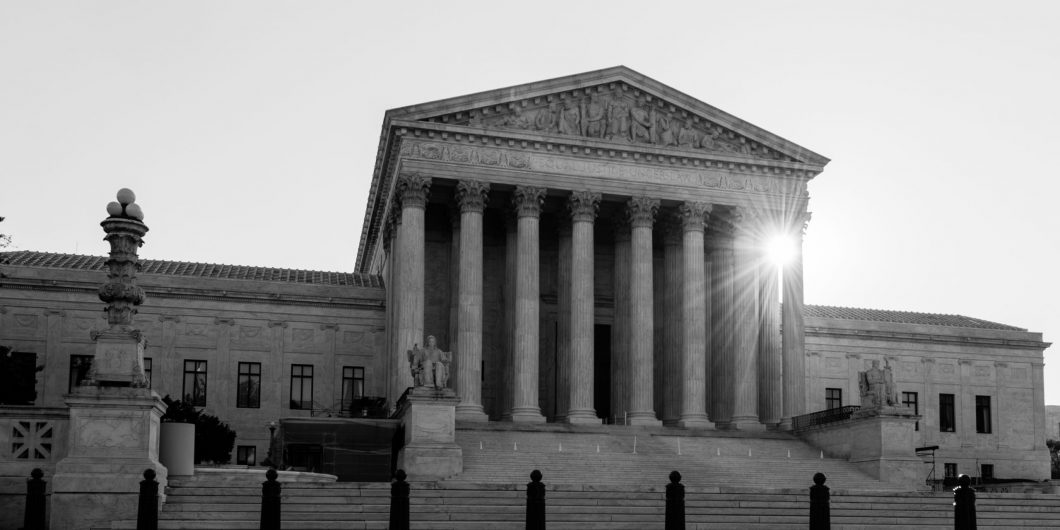 In New York State Rifle & Pistol Association v. Bruen, the Court ruled that the meaning of the Second Amendment’s right to “bear arms” must be determined by a careful examination of historical practices, and any limitations on the right must be “consistent with this Nation’s historical tradition of firearm regulation.”

Similarly, Justice Alito based the Dobbs opinion on Washington v. Glucksberg’s standard that any unenumerated right protected by the Due Process Clause’s “liberty” must be “deeply rooted in this Nation’s history and tradition.” And in Kennedy v. Bremerton, the Court appealed to the Town of Greece approach that interprets the Establishment Clause by “reference to historical practices and understandings.”

The turn to history is an attempt to put an empirical limit on the Court’s power to define and redefine the content of constitutional rights. Glucksberg was a compromise with the atextual, ahistorical, and linguistically ridiculous doctrine of “substantive due process,” which transformed the Fourteenth Amendment into a catchall that forbade any policy that a majority of the justices found morally questionable. History might serve as a more objective appeal. Justice Alito:

Historical inquiries of this nature are essential whenever we are asked to recognize a new component of the “liberty” protected by the Due Process Clause because the term “liberty” alone provides little guidance. “Liberty” is a capacious term. . . . In interpreting what is meant by the Fourteenth Amendment’s reference to “liberty,” we must guard against the natural human tendency to confuse what that Amendment protects with our own ardent views about the liberty that Americans should enjoy.

Therefore, when applied to many of the most pressing constitutional questions, the appeal to history is a hopeful development that corrects some of the worst depredations of our constitutional order. But on its own, without any further reconsideration of deeply entrenched judicial doctrines, it won’t bring the full constitutional recovery that the country desperately needs.

By the Constitution’s own terms, the federal government, federal rights, and the powers of the federal judiciary to enforce them, exist only because they have been consciously adopted by the people of the United States, through their legislatures or ratifying conventions. It therefore requires a conscious consensus: For any right to be added to the federal constitution and enforced by the federal courts against our legislatures and executives, the question must be put directly to the people in their states, and they must answer in the affirmative.

The Glucksberg standard serves merely as a simulacrum of this kind of consensus that the Constitution actually demands. The existence of common practices across states in American history may demonstrate a shared opinion, but it does not necessarily indicate any desire for a national, judicially enforceable right. It is not a conscious consensus. This is a meaningful distinction, because it makes the difference between the people of a state or the federal courts having the authority to adjust policy in the future should the public judgment, circumstances, or both change.

The Dobbs opinion seems to reference briefly the dim connection between the Glucksberg approach and the constitutional standard for amendment in its historical overview: “By the time the Fourteenth Amendment was adopted, three-quarters of the States had made abortion a crime at any stage of pregnancy.” But consider if the history of abortion rights had been the opposite, and three-quarters, or even 36 out of 37 states had allowed for abortion in 1868. The final state would still have been perfectly within its constitutional authority to forbid it then, and the 36 would have been free to change their policies in the future. The “deeply rooted” standard, however, might nevertheless empower the Courts to preempt such policies by creating a federal right that had never been expressed.

It is hard to imagine many new, unenumerated rights meeting the requirements of this method as it was deployed by the majority in Dobbs, but it affords considerable avenues for manipulation in the hands of other justices. The classic argument against Glucksberg is the level of abstraction problem: need one find a tradition of the precise practice in question in all of its specific characteristics? Or a more generalizable—and how generalizable—understanding of that liberty, like a “right to privacy”?

The terms of the historical approach also require a synthesis of diverse history—looking for “this Nation’s” tradition in a country with fifty-one legislatures, constitutions, and common-law traditions. Any such account that must range from Edward Coke, to colonial policy, to founding-era common law, to nineteenth-century statutes will be easy to manipulate in the public mind, with endless debates over which evidence is most important. If a state has never outlawed a practice but does not explicitly protect it in law, does that count as evidence of a right? How many states must limit a particular activity in order to show that there is no deeply rooted right to it? Are we to consider legislative practices spanning the country’s entire history, or look only to 1868, when the Fourteenth Amendment supposedly made these practices into federal rights? Justice Barrett’s concurrence in Bruen notes the importance of this sort of question in the context of incorporation. But she seems, perhaps, too confident that correct answers can be found.

Even the rights enumerated in the first ten amendments fail the constitution’s demand of a conscious consensus when applied against the states. Many of these amendments were adopted precisely to differentiate between federal and state powers, and so incorporation against the states winds up turning an amendment’s meaning on its head. Deep historical analysis may produce something that rhymes with constitutional meaning, but it doesn’t necessarily explain the Constitution itself.

The easiest example is the establishment of religion. Many states had established churches in 1791, and the First Amendment did nothing to disrupt that. The Establishment Clause was meant to clarify that the question of religious establishment was a state one, not a federal one—to be settled by the kind of vigorous public debate exemplified by Thomas Jefferson and Patrick Henry in Virginia. Incorporation, by applying the same standard to federal and state governments, therefore inverts the original purpose of the text by making the same standard apply to all. Justice Thomas, in his Town of Greece concurrence, accordingly observed that “The federalist logic of the original Establishment Clause poses a special barrier to its mechanical incorporation against the States through the Fourteenth Amendment.”

But the meaning of rights that do not have such a directly federalist structure or “logic” are nevertheless distorted by incorporation. The first ten amendments would not have been written had it not been for Anti-Federalists concerned to safeguard state authority against the federal encroachment that they knew would come. Had the amendments been presented to the people as limitations on state policy discretion, they would have had no future. And 1868 offers no change in status, the evidence for any popular intention to apply the Bill of Rights to the states by the Fourteenth Amendment being practically non-existent. So in cases like Bruen, the Court winds up looking at state-level “analogues” to understand the history of a constitutional provision, a methodology that shows we still aren’t focused on the Constitution itself, but on constructing a national consensus that was never declared.

However entrenched they may have become in the national mindset, therefore, incorporated rights inevitably fail the Constitution’s requirement of conscious consensus, just as substantive due process does. (Indeed, the logic incorporation ultimately boils down to a specific articulation of substantive due process.) There may be widespread agreement that important rights should be protected against the states, but we disagree wildly about the actual content of those rights because, so to speak, “we were never asked.” And for this reason, many of the great minds that once propelled the originalist revival were deeply skeptical of the doctrines.

In his Dobbs concurrence, Justice Thomas suggests reconsidering substantive due process more broadly. None of the other originalist justices joined him. And almost every judge and justice in the country—including Thomas—holds to some form of incorporation, even if it is through the Privileges or Immunities Clause. So why harp on things like substantive due process and incorporation that are broadly accepted, and even expected, today? What’s the point of even thinking about unscrambling those omelettes?

However “deeply rooted” these practices are, we shouldn’t fully make our peace with them, because we stare their baleful consequences in the face every day. As the reaction to these recent cases amply shows, the nationalization of our most contentious public questions is systematically destroying the political bands that have connected the people of the United States to one another. It has habituated us to fight over ideal, abstracted conceptions of ordered liberty, rather than work out in practice for ourselves what that entails. It has caused us to hope that a distant and unapproachable authority will hand down comprehensive and universal justice, rather than learning to establish a tolerable civil peace on our own. It has, practically speaking, caused us to forget that the federal amendment process or state constitutional rights even exist. And it has made us incapable of living with the differences in policy that a country as diverse as the United States inevitably requires.

Last year, as many as 37% of Americans expressed some openness to breaking up the United States. Those were mostly Republicans. Now Democrats are expressing fundamental objections to political union with “red” America. Constructing and enforcing what we determine to be “the Nation’s traditions” will not address this cancer that most directly threatens the country. It becomes clearer each day that Americans cannot live peaceably together if our public life is dictated by universalized policies handed down from on high—even if they are couched in the sacred language of “rights.” A fuller recovery of the robust federalism of the written, historical Constitution would require the exercise of long atrophied muscles of state- and local-level self-government, and it would also demand every citizen make peace with the reality of national differences.

Robert Bork once remarked that the “first freedom, implicit and taken for granted in the design of the Constitution, is the power of individuals to participate in making the laws by which they are governed.” The Court’s history-and-tradition approach is much closer to the original constitution than the kind of armchair philosophy that substituted for jurisprudence from the 60s onward. It therefore gets us much closer to recovering this essential liberty. But it continues to look for national, judicially enforceable answers to questions on which the Constitution, rightly and historically understood, offers silence. The constitutional federalism that we desperately need can only be recovered if the earthquakes that emanated from the Supreme Court this term are only the beginning.