The Cold War at Sea – 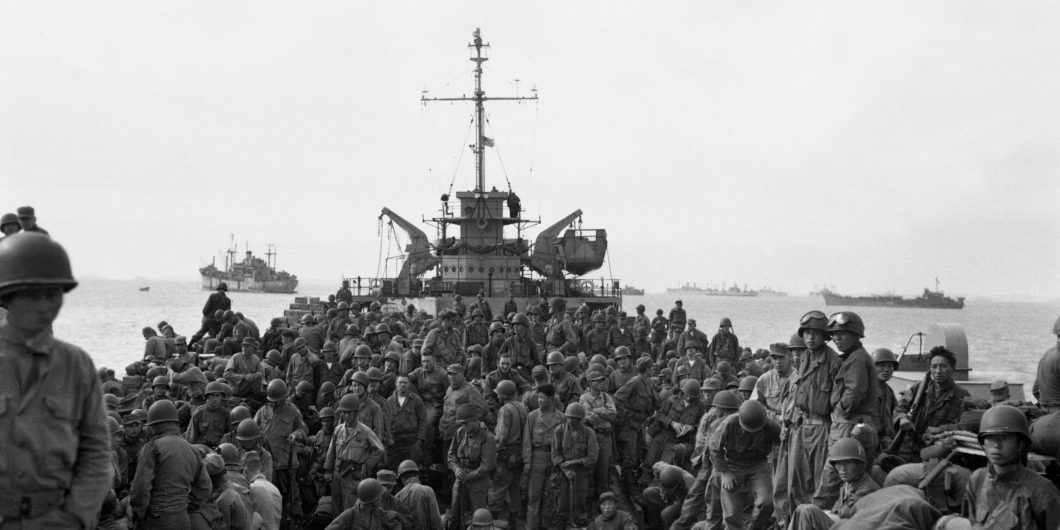 By the end of World War II, the United States had sent the world’s most powerful navy to war at sea. The exigencies of war pushed the U.S. Navy into overdrive to man, train, and equip naval forces. The hard-learned lessons of waging war across two hemispheres had impelled the Navy to develop and rapidly adopt new and hugely effective tactics, techniques, and procedures. By war’s end, the U.S. Navy had no peer in underway replenishment, forward base building and sustainment, amphibious operations, surface warfare, and carrier-based air power.

With the end of the war in 1945, however, public sentiment, a parsimonious Congress, and the Truman Administration’s hard ceiling on military spending forced the Navy to adopt a plan that resulted in a rapid and unprecedented demobilization. Nearly three million highly experienced sailors and Marines were discharged within months, new ship and new aircraft development and construction were canceled, and some 1,800 ships were scheduled for mothballing in the coming year. James D. Hornfischer’s new book, Who Can Hold the Sea: The U.S. Navy in the Cold War, 1945-1960 is the story of how a once-powerful Navy was lost and rebuilt anew. It’s also a cautionary tale for today’s decision-makers that underscores the foresight of the Founding Fathers who issued a constitutional mandate to “maintain a Navy,” and of ancient Greek strategist Themistocles’ keen insight that “whosoever can hold the sea has command of everything.”

This book is not a naval history in the classic sense. This is just the first part of the story of the U.S. Navy forged in the crucible of the Cold War and is, of necessity, “an interweaving of politics and war, of operations and presidential and command decision, of culture and politics, time and place, threat and perception of threat . . . driven by maritime realities more than by any other single force.” In the pages of Who Can Hold the Sea, Hornfischer identifies and describes four factors that shaped the U.S. Navy in the Cold War: the post-war reorganization of the U.S. armed forces, the fraught geopolitical climate, the onset of the atomic age, and the advent of modern technologies.

Hornfischer begins this narrative with a critical assessment of the post-war wrangle to reorganize the U.S. armed forces. The battle was hugely partisan and, as Hornfischer reveals, long-simmering inter-service rivalries were soon rubbed raw by massive budget cuts and the pace of demobilization. Air power proponents of strategic bombing argued the war-winning atomic bomb made armies and navies obsolete. Budget hawks claimed a small air force armed with the bomb was the cost-effective alternative to the huge and growing expense of maintaining conventional armed forces. Others, perhaps simply war-weary, looked forward to a Pax Americana underwritten by the U.S. monopoly on atomic power. As Hornfischer puts it, “In the offices of the Congress and in the angled corridors of the Pentagon, the longest running civil war in American life flared anew: the quest of generals and admirals to bring the other service to heel.” Hornfischer argues the Navy faced an existential threat from proposals to merge the armed services and create a single unified air force (as was done in Great Britain), and undo the air, land, and sea combined arms operations the Navy brought to lethal perfection in the Pacific War.

The Navy limped out of this first blood-less battle of reorganization of the armed forces with both naval aviation and the Marine Corps intact, but service leadership looked askance at policies that kept control of atomic weapons in the hands of the newly minted third branch of the military, the U.S. Air Force. Still, the battle for post-war resources was yet to be won and every service lobbied for surcease from the massive budget cuts demanded by the Truman Administration. Hornfischer argues that the U.S. Navy built during the early years of the Cold War was in many ways competing with the Air Force for funding even after the bruising existential fight for its survival as a separate service. Long accustomed to being the nation’s instrument of choice for power projection overseas, the Navy was confronted with the question of how a sea service could be employed to fight a land-based force fielded by a rampaging Soviet Union free from the need to rely on seaborne logistics.

Washington’s view of the utility of the Navy was remade quickly in the wake of the receipt of the famous “Long Telegram” from George F. Kennan, U.S. chargé d’affaires in Moscow, to the State Department. The widely-circulated memo—with its unambiguous warning that the Soviet Union was bent on creating communist states throughout Europe and even worldwide by subversion or force or arms— triggered a wholesale reappraisal of Washington’s war-time partnership with Moscow. Kennan, in Hornfischer’s assessment “the most Russian-savvy of American diplomats,” was able to speak the veritable truth to power and “articulated the nature of the geopolitical threat in tones that were at once measured and discerning and yet galvanizing,” and quickly undercut the argument of both the idealists and the accommodationists who favored a softer approach to Moscow. Then, as events transpired Truman realized the “fleet was the most useful tool in his kit, even as he pared it flesh from bone.”

Moscow had never drawn down its wartime strength and early in 1946 began to flex this muscle to promote the Communist International (Comintern) in Eastern and Southern Europe and oil-rich Iran. The Comintern was pushing for legislative victories in Italy, Greece, and Turkey—governments friendly to Moscow in those countries could give Russian air power bases needed to overfly the Eastern Mediterranean. Who Can Hold the Sea recounts the first of what would become routine “show the flag” visits by the U.S. Navy as Washington dispatched the battleship USS Missouri and her escorts to the Mediterranean for port calls in Turkey and Greece. The appearance of the Fleet was a great boost and led to election victories for democratic and sitting governments in the region. The visits also drew a flurry of complaints from Moscow; the Kremlin had no countervailing maritime force to put to sea to challenge the American show of strength.

A new U.S. Sixth Fleet was established in Naples, Italy, and was the beginning of a permanent U.S. presence in the region that exists even today. While the Truman Doctrine had not yet been officially promulgated, Hornfischer argues cogently that the U.S. Navy was now on the front line of containment of Russian advances in Southern Europe. The deployed forward, foreign basing of the U.S. Navy was to become a staple of the National Defense Strategy during the Cold War, not only to check Soviet ambitions in Europe and the Mediterranean, but to protect U.S. interests abroad. By 1948, China had fallen to Communist forces and the United States was heavily invested in Japan as a base for operations that would protect its now threatened interests in East Asia.

Who Can Hold the Sea was never intended, as the author explains in his introduction, to include a definitive battle history of the U.S. Navy in the Korean War or in the Cold War. The broader scope of the narrative instead explores the mismatch between ways and means that plagued the U.S. Navy during the first years of the Cold War and recounts episodes of the effectiveness of combined arms operations to include the daring amphibious landing behind North Korean lines at Inchon, by the U.S. First Marine Division embarked by the U.S. Seventh Fleet.

While not a definitive history of the war, Hornfischer’s skills as a narrator of history come to the fore in the chapters on the Korean War. He relates, for example, how combat in Korea pushed the U.S. Navy’s understrength aviation assets to the limit and then beyond. Carrier pilots—most of whom were flying aircraft built or designed in World War II—flew round the clock on missions for interdiction, close air support, combat air patrol, reconnaissance missions, night attack, and airborne early warning. In Hornfischer’s words:

The carrier air groups, versatile as Swiss Army knives, were constantly in demand and thus pushed to the limit of their capacity. The continuous operations were a grind, exhausting pilots through their mundanity—dwindling fresh produce, tired reruns of old movies, freezing temperatures redeemed only by the sophomoric pleasure of an occasional snowball fight on the flight deck, punctuated by occasional terror—deck fires, explosions, crash landings, and the often unwitnessed tragedies of pilots in extremis over distant targets, manifested finally by an empty seat in a ready room . . .

In the hands of a less capable chronicler, teasing out the warp from the weave in the interwoven threads of politics, economics, international relations, and military preparedness would have been a daunting task. That Hornfischer succeeds in his task throughout most of this book is a re-validation of his skills in bringing the record of the history of the U.S. Navy to light with insight and understanding. Regrettably, Hornfischer’s new work is the last in the line of exceptional works by an accomplished naval historian and a gifted writer. His previous books included the masterful The Fleet at Flood Tide, Neptune’s Inferno, and The Last Stand of the Tin Can Sailors—all highly acclaimed, well-researched chronicles of the U.S. Navy in the Pacific during World War II. Who Can Hold the Sea was published posthumously as the author succumbed to cancer in 2021.

As a result, Who Can Hold the Sea is an unfinished work, and the pace of the narrative lags after the author’s assessment of the Korean War, despite sound chapters on the Suez Crisis and the remarkable under-ice polar voyage of the Nautilus. The development of nuclear propulsion—driven by the peevish, eccentric, brilliant, and determined Admiral Hyman Rickover—is covered here, but not in the depth it deserves to describe the revolution of the “nuclear navy,” the evolution of the nuclear-powered big deck aircraft carriers, and the rise of the ballistic missile nuclear submarine as the foremost capital ship. Likewise, the chapters devoted to the development of the Navy’s subsurface launched intercontinental ballistic missile, nuclear deterrence from the sea, and shipborne surface-to-air missiles are skimpy.

In like manner, other parts of the book bear the marks of an unfinished work. The table of contents is presented as an author’s working outline for chapter topics. There are no endnotes despite Hornfischer’s deserved reputation as a diligent researcher. There are digressions and extraneous content that detract from the book that the author and a collaborative editor would likely have excised before publication. Some readers may be left to wonder why publisher Bantam Books did not retain another writer to finish this book. The practice is not unknown even in cases of authors of renown. Paul Reed, for example, was retained to complete the third and final volume of the magisterial biography of Churchill, The Last Lion, after author William Manchester’s death.

Hornfischer’s family was engaged in the final preparation of the manuscript. So, perhaps it is not unexpected that the coda for this author’s last work should be penned by his wife who wrote: “This book is his last published work, and as his illness progressed, his writing told a story within a story. Please regard this text as the last letter from an old friend, and please understand that your friend was simply not able to wrap up the story with his usual finesse and depth of detail.”

It’s a poignant epitaph for an author who made such a great contribution to the writing of American naval history.