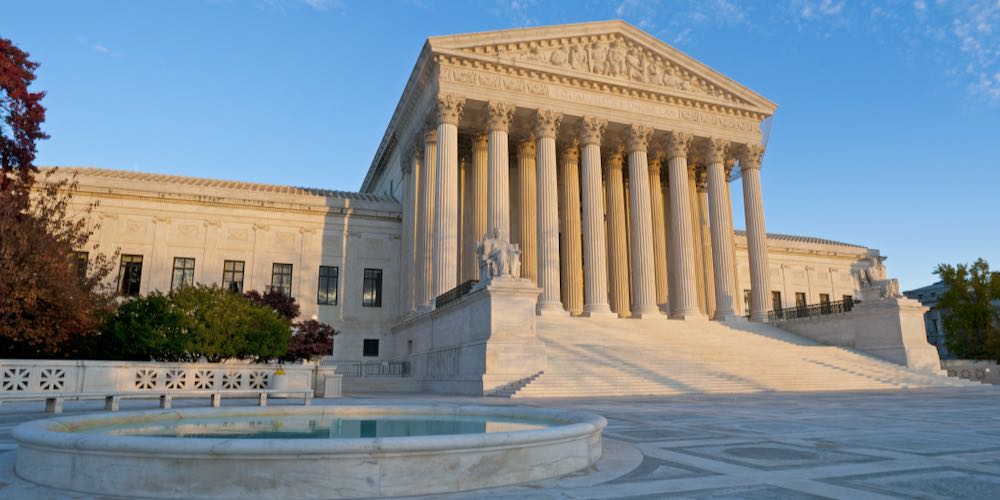 With exquisite timing, James Wallner and Lee Drutman published “A New Way to Select Justices?” here at Law & Liberty on June 20. I note the timing of their essay because their thesis is that the Supreme Court is ineluctably a political institution, quite unable in the nature of things to avoid being tugged this way and that by the “specific views and partisan allegiances” of the justices. And four days after their essay’s appearance, the Supreme Court in Dobbs v. Jackson Women’s Health Organization overturned the most egregiously political, constitutionally misguided, and profoundly unjust ruling of our times, showing that a majority of the justices do after all understand that the imposition of their own political views on the country in the guise of legal decisions is an abuse of the trust we repose in them.

I expect that Wallner and Drutman would take exception to that characterization of Dobbs, seeing it as no less a “political” ruling than the precedent it overturned, Roe v. Wade. Perhaps, like a great many scholars of “judicial behavior” in my own discipline of political science, they are incapable of seeing the Court as anything other than a wholly political institution. It is typical of such political scientists to take no interest whatever in the opinions of the justices as even potentially valid accounts of the reasons for their decision; instead they “code” the results as “liberal” or “conservative” and believe they have explained something when they have not.

Similarly, Wallner and Drutman merely presume that judges are incapable of disciplining themselves to the norms of the law, and even erroneously claim the support of Federalist No. 10 on the factious behavior we should expect in political life—while conspicuously ignoring the later essays in the Federalist on Publius’s expectations for an apolitical independent judiciary.

But I understand that our authors are concerned with the appearance of merely political behavior among the justices (however much they may contribute to that appearance), and they would like to head off attempts on the left to “pack” the Court by expanding its membership. For my part, I have no fear of this happening today, if Franklin Roosevelt at the zenith of his popularity and congressional strength could not pull it off. And President Biden opposes it.

Narrowing their focus, and conceding—or rather asserting—that politics cannot be taken out of judging, Wallner and Drutman propose to upset the litigation strategy of interest groups by randomizing the membership of the Supreme Court through a “sortition” process that would leave the chief justice in place, but choose eight new rotating associate justices on an annual basis from among the 179 judges (assuming all vacancies filled) on the thirteen U.S. circuit courts of appeals. (Wallner and Drutman refer to the same number of judges but only twelve circuits, forgetting to include the Federal Circuit, which accounts for twelve of those 179.)

So eight of these 179, randomly chosen, would (as they propose) take a “leave of absence from their circuit-court duties to serve on the Supreme Court” with the permanent chief justice for one year, and then return to their circuits. Let us examine the practical, institutional, and political merits of this proposal.

Early in their essay Wallner and Drutman claim that “the Supreme Court can adopt a reform to mitigate litigation strategies used by activists to adjudicate controversial policy questions” (my emphasis) and then elaborate their idea about sortition of circuit judges. But it is obvious that the Court itself can adopt no such reform. It would take at least a congressional enactment that alters the nature of the appointments that judges are given to the bench.

I say at least an act of Congress because in truth the idea is utterly impracticable without a constitutional amendment. Each of the present justices has a permanent tenure on the Supreme Court—and while each is also a “circuit justice,” there is no statutory compulsion for them to serve actively in the decision of cases at the circuit level. And no circuit judge serving today has an appointment that authorizes his or her service on the Supreme Court, while each of them too has a constitutionally protected permanent tenure.

What this means is that each and every associate justice of the Supreme Court would have to pass from the scene, and each and every seat on the federal circuit courts would likewise have to fall vacant, before Wallner and Drutman’s scheme could be carried out by the passage of a mere statute. (It is obvious that a piecemeal effectuation of their idea would not work.) So a constitutional amendment fundamentally reordering the federal judiciary—or authorizing the Congress to do so—would have to be proposed and ratified using the amendment processes of Article V. And that amendment would have to disregard—at least for the current associate justices and circuit judges—the Article III protection of their tenure “during good Behaviour.”

And for what? For a scheme in which eight circuit judges move to Washington, D.C. for one year to be temporary associate justices of the Supreme Court. For many of those judges, that will mean either uprooting their families for a year, or being apart from them for weeks at a time. Perhaps Wallner and Drutman contemplate their working the abbreviated week enjoyed by members of Congress, so they can go home on weekends.

The inconvenience to the judges chosen is not terribly important if the institutional effects are as advantageous as Wallner and Drutman claim. Let’s examine those.

Our authors assert that their sortition idea would enhance the institutional legitimacy of the Supreme Court “because picking its associate justices randomly depersonalizes the process” and thus makes the prediction of decisions more difficult. Their model, of course, is the random selection of three-judge panels in today’s circuit courts of appeal. But while random sortition of circuit panels does make prediction of a ruling’s outcome more difficult, that is not the reason for the random selection of judges. The reason is that each circuit has an enormous caseload—certainly compared to the Supreme Court, anyway—and the judges (numbering from just six in the First Circuit to 29 in the Ninth) simply have to divide up the work among small panels.

But if you talk to any federal circuit judge, he or she will tell you that collegiality with the other judges of the circuit is conducive to efficient, fair-minded decision-making. Odds are that judges’ familiarity with circuit colleagues in repeated panel encounters also contributes to the high proportion of unanimous decisions in the circuits—though it is by no means the only or most important variable in that outcome. The Ninth Circuit, with a dozen more judges than the next largest circuit court (not to mention the ones on senior status also serving on some panels), has grown large enough for observers to worry about a collegiality deficit.

All this, Wallner and Drutman would sacrifice for the sake of—to put it bluntly—unpredictability. But what’s so great about unpredictability? Its opposite—predictable decision-making according to known principles and precedents—is generally highly prized in our legal system. Indeed, it is predictability—steady conformity to such principles and precedents—that bolsters the institutional legitimacy of the Supreme Court. When precedents fall, as Roe v. Wade fell in the Dobbs ruling, there is some surface plausibility to the claim that the Court has wounded its own legitimacy. I would argue that in this instance the claim is mistaken, because it was Roe itself that inflicted that wound for 49 years. But one does not like to see precedents mowed down frequently in great numbers.

But just this kind of instability might ensue if Wallner and Drutman’s idea were put into effect. Their sortition process could produce a very progressive Court one year, and a very originalist one the next. And each year’s crop of one-time associate justices (some of whom might randomly serve more than once) would have little reason to respect the precedents set by earlier groups. Each freshly reconstituted Supreme Court would have an incentive to make hay while the sun shines, and let the future take care of itself. And with this sort of future behavior perfectly foreseeable, let’s finally consider the political impact of Wallner and Drutman’s idea.

Everyone deplores the extent to which the selection of Supreme Court justices has become a political spectacle, with the full engagement of parties, interest groups, and ideological allies in the media to leverage nominations and either ramrod them or obstruct them in the Senate confirmation process. The poison of Roe v. Wade in our constitutional order most certainly has contributed to the high-stakes intensity of the process. (With Roe gone, this may actually subside in time—but not very soon.)

To some extent, this politicization has spread to the process of circuit court appointments, because Supreme Court justices are so commonly plucked from the circuits. But Wallner and Drutman’s reliance on the population of circuit judges to fill rotating seats by sortition on the Supreme Court would undoubtedly exacerbate this phenomenon, not alleviate it.

With important constitutional issues at stake, why shouldn’t political actors focus their energies where they think they can make a difference? Wallner and Drutman’s proposal would not depoliticize the Supreme Court so much as it would hyper-politicize the selection of every federal appellate judge in the country. Struggles over every circuit seat would consume great quantities of political energy in the Senate, in our parties, in the press, and in electoral politics.

What Wallner and Drutman propose, in short, is that we amend the Constitution, tossing life-tenured judges from their seats, in order to transform our judiciary into an even more politicized and even less institutionally trustworthy branch of government. If there are real problems with Supreme Court decision-making—and I think there are—the Wallner-Drutman proposal is not the solution to them.