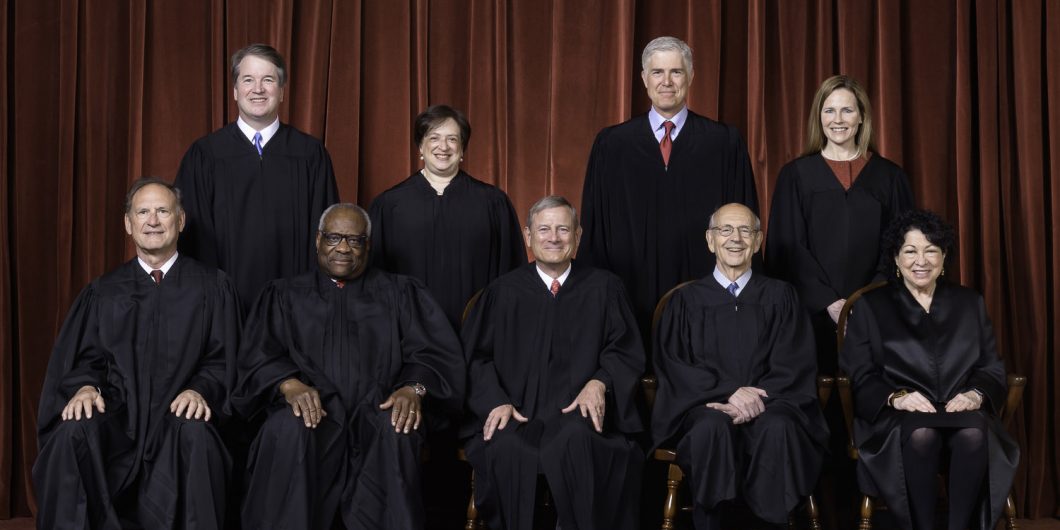 It feels like 1938 again. That was the last time the Supreme Court embarked on a path of far-reaching constitutional change. Once the champion of liberty of contract and states’ rights, the Court jettisoned those commitments in the span of one year to propose a new set of judicial priorities. It communicated these in its infamous footnote four in the Carolene Products case, and then began its work of showing deference to Congress in the economic sphere, while recrafting much of the Bill of Rights to offer greater protection for “prejudice against discrete and insular minorities.” Now, in 2022, the Court is again shuffling the deck amongst rights. Some rights are being elevated, particularly the free exercise of religion and the right to bear arms, while others are being demoted, including the establishment clause and rights of the accused. As was done in Carolene Products, the Court is communicating future doctrinal shifts in an understated fashion, in the form of breadcrumbs sprinkled in dicta.

One development hiding in plain sight is the demotion of the establishment clause. Not so long ago, it was virtually impossible for state funding to be allocated directly to religious institutions because, in 1971, the Supreme Court had created the much-maligned “Lemon test.” Its three prongs were created to prohibit funding to parochial schools, to forbid prayers in public schools, and to outlaw religious displays on public property. While Lemon was repudiated in dissents, concurrences, and scholarly commentary, it had not been flatly overruled. Mostly, it had been ignored by the Court. This term, Lemon has officially been sent to its grave. In Kennedy v. Bremerton School District, the case in which a football coach was fired for praying on the field, the majority wrote: “this Court long ago abandoned Lemon and its endorsement test offshoot.”

Lemon being dead is big news, especially in a case that wasn’t concerned primarily with the establishment clause. But tying Lemon’s demise to a rejection of the endorsement test, an alternative test that has been invoked only to prevent prayers to school children, leads to the prospect that prayers in public schools may soon be constitutionally permissible. Together, Lemon and the endorsement test cover the field of approaches the Court has taken to prohibit school prayers. Two of Lemon’s prongs were first articulated in Abington School District v. Schempp, and its companion case, Murray v. Curlett.  Abington forbade morning readings from the Bible, while Murray forbade the Lord’s Prayer from being recited in a public school.

After Lemon, the endorsement test was created by Justice O’Connor in notable concurrences to deal with the issue of school prayers; her approach ultimately commanded a majority in cases such as Lee v. Weisman. By overruling both Lemon and the endorsement test, it is hard to see what now prevents school boards from mandating morning prayers, should they wish to reinstitute these. Kennedy may have involved a private prayer, decided on free exercise and speech grounds, but because of its establishment clause dicta, prayers may soon be reintroduced in public schools.

Miranda is another right that appears to be on the chopping block. Many can recite verbatim the Miranda warning, even if they have never been given it by a police officer prior to questioning in a custodial setting. Most everyone believed that the Supreme Court had decided that it would be a violation of one’s Fifth Amendment right to be deprived of this warning before being questioned by the police. However, the Court has suggested otherwise this term. In the case of Vega v. Tekoh, the majority announced: “Miranda did not hold that a violation of the rules it established necessarily constitute a Fifth Amendment violation.” Instead, the Court said that the Miranda warning is only “to safeguard [a right against self-incrimination] during a custodial interrogation.”

Vega was not decided in the context of a criminal case so it remains to be seen whether an un-Mirandized confession, leading to a conviction, will be admissible into evidence. Vega only considered whether the failure of an officer to read the Miranda statement permitted the officer to be sued under federal law in a civil case for a violation of a constitutional right. Yet the Court’s conclusion that the Miranda warning is not a constitutional right, but a means of safeguarding a right, was based upon its interpretation of cases involving criminal convictions. How far the Court will take its new precedent in Vega remains to be seen.  However, it is a fair conclusion that the erosion of the Miranda warning is underway.

The administrative state is a third domain in which formerly settled expectations are being shaken. Until very recently, most believed that Congress could delegate broad and almost standardless discretion to agencies without being told it was unconstitutionally delegating its lawmaking power. So long as “intelligible principles” were found in a statute, the Court found no constitutional problem. While the meaning of “intelligible principles” remained vague, the Court was inclined to discover they existed even in the most broadly worded delegations of rulemaking authority. The Court coupled its “intelligible principles” standard with Chevron deference so that, if Congress did not speak clearly (and it wasn’t expected to) and an agency’s interpretation was reasonable, the Court would defer to an agency’s rules.

The Court defers no more. Over the last year, the Court decided four “major questions” cases. Now, the Court will no longer tolerate agencies making transformative policy decisions based upon ancillary and vaguely worded statutory provisions. But the big news, for those interested in separation of powers, is that the Court appears to be toying with the idea of replacing the lax “intelligible principles” standard with a requirement that Congress must speak more clearly in delegating transformative regulatory powers to agencies.

Finally, Dobbs has called into question the future of substantive due process rights, including protections for contraception and private sexual conduct. Citing Washington v. Glucksberg, the Court has argued that unenumerated rights receiving constitutional protection must be “deeply rooted in this nation’s history and traditions and implicit in the concept of ordered liberty.” Juxtaposed to this evaluative standard was the statement that “nothing in this opinion should be understood to cast doubt on precedents that do not concern abortion” because abortion involves the weightiest of moral considerations. The Court was of the view that “The exercise of rights at issue in Griswold, Eisenstadt, Lawrence, and Obergefell does not destroy a “potential life,” but an abortion has that effect.”

Whether the Court admits it or not, Dobbs has called into question the foundation of Griswold, Eisenstadt, Lawrence, and Obergefell. Were the Court to follow the dominant logic of Dobbs in future cases, the Court wouldn’t consider current views about the morality of contraception, sexual conduct, or same-sex marriage; it would decide whether these are found in the Constitution as a historical matter. If they are not, these issues should be returned to the states. One might have expected the Court’s extended discussion of stare decisis to have distinguished Griswold or Obergefell from Roe based upon a legally cognizable distinction, such as differences in the nature of the reliance interests at stake.

Yet the majority opinion made no such effort. In their concurrences, Justice Thomas candidly invited a reconsideration of other substantive due process cases, while Justice Kavanaugh, guided by a prudential judgment, went to some lengths to indicate he has no interest in revisiting Griswold and its progeny. The majority may be disinclined to follow the reasoning in Dobbs to its natural conclusions. But the internal pressure of its logic will remain. In the near term, the breadcrumbs lead to a door closed out of fear of public perception. But the door could open someday.

As the Court has eroded the establishment clause, the Fifth Amendment, the administrative state, and substantive due process (all in one term!), it has also strengthened the once measly free exercise clause. While conservatives once lamented that Employment Division v. Smith, authored by Justice Scalia, made the exercise of religion almost irrelevant as a constitutional right, free exercise is now a meaningful anti-discrimination provision. This term, in Carson v. Makin, the Court iterated that religious institutions may not be excluded from receiving state financial benefits available to secular organizations, thereby entrenching caselaw dating to 2017 in Trinity Lutheran. States are precluded from arguing that the establishment clause forbids them from funding religious organizations if benefits are made available to others. They are also prevented from disciplining school employees who offer private prayers in school, as decided in Kennedy. The free exercise clause now overshadows the establishment clause.

The Second Amendment is also ascendant. In Heller and McDonald, the Court held that the right to bear arms includes the right to possess a handgun for one’s protection inside of one’s home. This term, the Supreme Court rejected “a home/public distinction with respect to the right to keep and bear arms” in New York State Rifle & Pistol v. Bruen. Emphasizing that the right to “bear” arms for the purpose of self-defense is usually irrelevant within the context of a home, the Court emphasized the potential for a dangerous confrontation is more likely to occur outside. While states may have licensing laws, they have little discretion to dictate when licensed carriers may carry a firearm in public.

This profound reshuffling of constitutional priorities begs for an explanation to the question— why now? The most simplistic answer is that the composition of the majority has changed, and so too, have its commitments. The strategy of cultivating conservatively minded jurists who are respectful of the Founding is having its moment. And there is much truth to this.

Yet the Supreme Court remains the weakest branch and a transformation so bold is indicative of other political dynamics. This was apparent in 1938. At that time, Court’s makeover was due primarily to substantial pressure from its coequal branches, especially from a newly re-elected Franklin Delano Roosevelt, who was intent on packing the Court with sympathetic justices to get his New Deal reforms passed.

Viewed from the lens of the Court’s relationship to its coequal branches, the Supreme Court’s boldness may well reflect the current weakness of Congress and the Executive. The weakness of the elected branches, in turn, stems from deep ideological divisions among the American people, ensuring no national consensus can long hold sway. Viewed in this light, it is ironic that the Supreme Court has returned deliberation about abortion, an issue of greatest moral weight, to a people who have become more accustomed to vitriolic attacks than to reasoned argument. But perhaps giving the people moral responsibility, which includes living with the consequences of their own decisions and learning to work effectively with other people, is what is most needed to tone down the vitriol. That, at least, is the hope.

The Court’s breadcrumb trail suggests many more doctrinal changes are looming. Some of these will further rile a deeply divided people. Those who love America would do well to remember that judicial doctrine does not guarantee good governance. Ultimately, the constitution is a guarantee of self-governance to the people. As Tocqueville observed, in America, the laws may be important, but the people’s mores are more important still. Whether Americans remain capable of rising to the challenge of responsible self-governance amidst their deep divisions, without resorting to violence, remains to be seen. If they aren’t, the Supreme Court’s crumbs won’t be worth fighting over. But if Americans are up to the challenge of self-governance amidst division, they will need to find a peaceful way of coping with the Court’s reshuffling of rights and of once settled doctrine.

Of course, 2022 isn’t really 1938.  But transformative challenges still lie ahead.