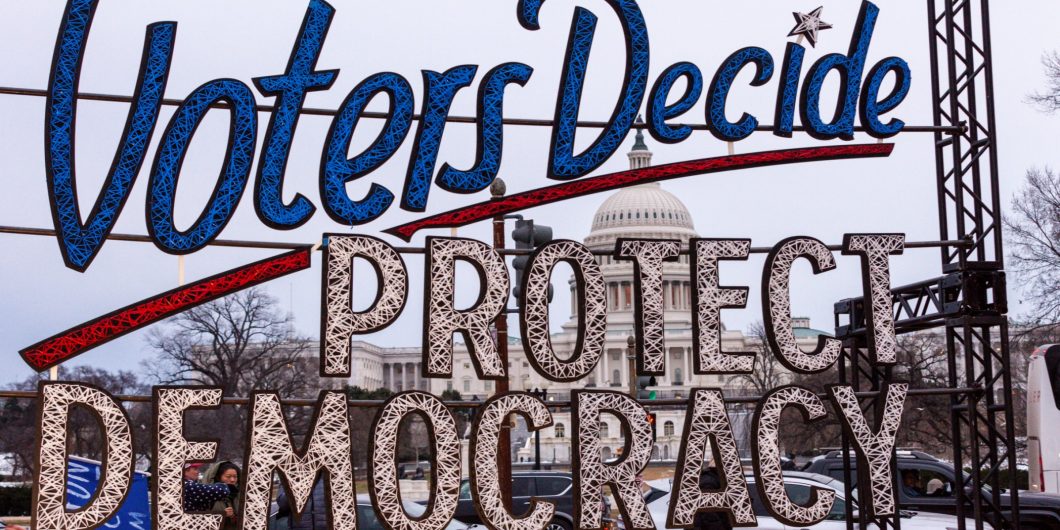 Hardly a day goes by without hearing some impassioned paean to “our democracy” and concerns about the dangers it faces. But do we have a common understanding of democracy?

The left’s concept of democracy contains an apparent tension: On the one hand, it wants to make sure that everyone has an equal voice in elections to assure government accountability to the people. Thus, it seeks to end gerrymandering, reduce, if not eliminate, the political influence of the rich, and even reform the Senate. On the other hand, once representatives are elected, the left is perfectly happy, indeed eager, for them to delegate large swaths of power to the administrative state, where bureaucrats, not elected representatives, formulate the governing rules. The concern for making sure that everyone has a precisely equal voice sits uneasily with empowering a government bureaucracy that is unlikely to be closely accountable to that electorate for its decisions. The tension is particularly acute because modern government has become administrative government.

Conservatives, by contrast, seem much less concerned about equalizing citizens’ voices in the electoral process to make representatives accountable to the people, but instead have focused on increasing the administrative state’s accountability to representatives. Thus, conservatives may be thought to have a tension of their own when it comes to democracy. Are these different combinations of positions explicable only in realist terms or are there more principled reasons lying behind two distinct versions of democratic ideals?

A realist perspective on politics can explain the left’s lack of concern for making legislatures accountable for the administrative state. Bureaucrats stand to the left of the median Democrat, to say nothing of the median voter. Moreover, public choice theorists have shown that bureaucrats are interested in growing the bureaucracy. Thus, giving more power to the bureaucracy is a force multiplier for moving society to the left.

It might be objected that the President controls the administrative state and that voters elect the President, assuring democratic accountability. But that is an imperfect control of the substantial discretion provided by large delegations. Congress has insulated from removal the heads of many of the most important agencies, like the Federal Trade Commission and the Federal Communications Commission, making them only liable to dismissal for cause. Not surprisingly, from a realist perspective, it is the left that defends this insulation from presidential control. And even when the President can dismiss agency heads, it is politically costly to do so: he is implicitly admitting that he made a mistaken appointment and then must spend political capital to confirm a successor.

As a result, any agency head has substantial freedom of action. Moreover, given that it is important for his career that he be considered a success, he has substantial incentives to compromise with the career bureaucrats that staff his agency. Government employees have effective life tenure, and getting along with them makes for an easier life and more productive agenda. Thus, the political valence of the bureaucracy matters.

The left’s enthusiasm for purifying the electoral process can also be explained through a realist lens. Reducing the influence of the wealthy in politics will increase the power of the left-leaning chattering classes—the media and academia—in setting the political agenda. Thus, although the left now receives a roughly equal amount of money from the rich, particularly as the rich have become more socially progressive, banning it again has a left valence.

Making it easier to vote by mail facilities the power of organized groups to influence ballots. Because Democrats have more dependent voters (those whose vote is influenced by entities such as unions and community organizers), legal ballot harvesting may advantage them. To be sure, political scientists have suggested that most voter access laws have relatively little partisan effect. The vast majority of people can vote if they want, and there is little voter fraud. But the left may be able to use election laws to energize its base with the slogan that the Republicans are suppressing votes.

Though self-interest partly explains the combination of positions held by both the left and right, there are also deeper and more principled rationales that suggest a fundamental conflict in their concepts of democracy. First, the left sees democracy as creating a general will that the bureaucracy with its greater reasoning ability applies to concrete situations. These ideas have deep philosophical roots. The notion that majority rule can capture the enduring general will of society rather than just a snapshot of the constellation of interests that happens to exist at a particular time goes back to Rousseau. The view that the bureaucracy can convert that general will into concrete solutions through reason goes back to Hegel. American progressivism helped such notions cross the Atlantic.

The left’s combination of views leads to a focus on purifying the general will by eliminating extraneous influences like money. The claim that bureaucracy is a social apparatus distinguished by its reasoning capacity depends on the notion that it is a meritocratic institution whose employees depend on salary from the state, guaranteeing that they will follow the public interest, not special interests. This conception then becomes a justification for delegating to it the power to carry out the general will. Democracy ultimately brings about a historicized rationality to social affairs. Democracy must be rational if the arc of history is to bend toward justice, to use a favorite phrase of the left. Under this view, the press and academia are also reasoning institutions, being in the left’s view relatively meritocratic and not compensated by particular interests. If restricting the influence of the wealthy (who are partial to the sources and maintenance of their wealth) increases the influence of academia and the press, so much the better.

Moreover, the left—at least the very substantial portion that is invested in democracy—has a principled view of the world that requires the general will be the dominant social force. The left believes that human flourishing is threatened less by government than by private power, such as the market, which needs to be regulated, and conventional norms, from which governmental power may need to liberate us. Government can constrain the market and promote liberation in today’s world only through substantial delegation because of the self-interest of legislators who must be concerned always with status vis-a-vis one another in power politics.  And if the democratic will is so foundational, it must be purified: hence the concern about gerrymandering and the unequal popular representation in the Senate.

The right—at least the very substantial portion that still adheres to democracy—has a much more modest view of both the nature and function of democracy. Democracy does not capture any general will. An election provides only a snapshot of people’s vacillating interests. Moreover, citizens do not even systemically review the policies that are at issue in an election. Because their vote is so unlikely to change the result, they do not gather the pertinent information. For the most part, they are rationally ignorant of politics and easily influenced by events irrelevant to governance.

Conservatives also have a higher opinion of social ordering from non-democratic sources, from the market to the family to civic associations like religious institutions. They worry that government will disturb this more natural ordering. To be sure, since government is required, the right recognizes the need for constraints on rulers and for feedback information about the preferences of citizens, but that is all that can be expected from democracy. If the left idolizes the perfected social power of democracy, the right celebrates only its protective one.

As result, the right is very concerned about delegation to administrative agencies. The deliberation and consensus required by forcing a bicameral legislature to agree on detailed rules help assure that democracy will not disturb or destroy other forms of social ordering without sufficient consideration. Far from being repositories of reason, bureaucrats are another group with interests that need to be kept on a short leash because of their powerful institutional position.

The right’s limited view of the function of democracy makes it much less concerned with perfecting representation. It performs its protective function quite well even without perfect equality of influence. And some of the unequal features themselves protect important elements of an organic society. It is good that the rich have more influence: in a commercial republic, they know how commerce works. Because of its unequal representation, the Senate protects small states from being ignored and thus preserves federalism. Some of the suggested electoral reforms are worse than any disease. Drawing election districts by commission gives power to commissioners or their bureaucratic staff—groups that pursue their interests all the more effectively because they do so under the veneer of the public interest.

To be sure, one can imagine concepts of democracy between these two antitheses. For instance, John Hart Ely in Democracy and Distrust was enthusiastic about making sure that democracy has more egalitarian inputs. But in a portion of the book rarely mentioned, Ely also called for a revival of the delegation doctrine. Ely was a pluralist who nevertheless was more optimistic about democracy than most conservatives and more pessimistic about traditional forms of social ordering.

Because most of the right and left today disagree about the nature of democracy, however, it is too facile to say, as the President recently suggested, that the Americans can be united by adherence to the democratic form of government. To be sure, there can be hope that they will accept the results of elections. But that is democracy at its most mechanical. The spirit of democracy cannot be separated from the substance of one’s view of how society works. The left and right have entirely different understandings of society and cannot be expected to agree in any deep sense on its mode of governance. Belief in “democracy” won’t bridge our differences.